Halides of the Representative Metals

Halides of the Representative Metals

Thousands of salts of the representative metals have been prepared. The binary halides are an important subclass of salts. A salt is an ionic compound composed of cations and anions, other than hydroxide or oxide ions. In general, it is possible to prepare these salts from the metals or from oxides, hydroxides, or carbonates. We will illustrate the general types of reactions for preparing salts through reactions used to prepare binary halides.

The binary compounds of a metal with the halogens are the halides. Most binary halides are ionic. However, mercury, the elements of group 13 with oxidation states of 3+, tin(IV), and lead(IV) form covalent binary halides.

The direct reaction of a metal and a halogen produce the halide of the metal. Examples of these oxidation-reduction reactions include:

Reactions of the alkali metals with elemental halogens are very exothermic and often quite violent. Under controlled conditions, they provide exciting demonstrations for budding students of chemistry. You can view the initial heating of the sodium that removes the coating of sodium hydroxide, sodium peroxide, and residual mineral oil

The active representative metals—those that are easier to oxidize than hydrogen—react with gaseous hydrogen halides to produce metal halides and hydrogen. The reaction of zinc with hydrogen fluoride is:

The active representative metals also react with solutions of hydrogen halides to form hydrogen and solutions of the corresponding halides. Examples of such reactions include:

Several halides occur in large quantities in nature. The ocean and underground brines contain many halides. For example, magnesium chloride in the ocean is the source of magnesium ions used in the production of magnesium. Large underground deposits of sodium chloride, like the salt mine shown in the figure below, occur in many parts of the world. These deposits serve as the source of sodium and chlorine in almost all other compounds containing these elements. The chlor-alkali process is one example. 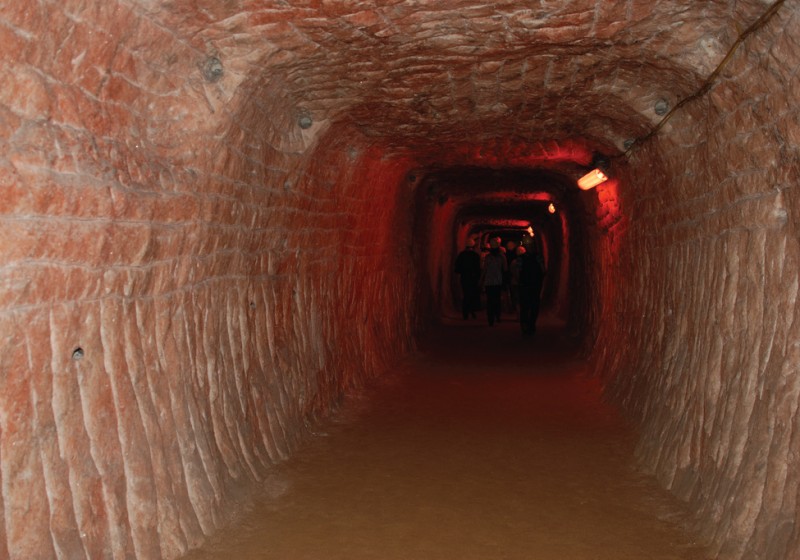 Underground deposits of sodium chloride are found throughout the world and are often mined. This is a tunnel in the Kłodawa salt mine in Poland. (credit: Jarek Zok)