The alkaline earth metals (beryllium, magnesium, calcium, strontium, barium, and radium) constitute group 2 of the periodic table. The name alkaline metal comes from the fact that the oxides of the heavier members of the group react with water to form alkaline solutions. The nuclear charge increases when going from group 1 to group 2.

Magnesium is a silver-white metal that is malleable and ductile at high temperatures. Passivation decreases the reactivity of magnesium metal. Upon exposure to air, a tightly adhering layer of magnesium oxycarbonate forms on the surface of the metal and inhibits further reaction. (The carbonate comes from the reaction of carbon dioxide in the atmosphere.) Magnesium is the lightest of the widely used structural metals, which is why most magnesium production is for lightweight alloys.

Magnesium (shown in the figure below), calcium, strontium, and barium react with water and air. At room temperature, barium shows the most vigorous reaction. The products of the reaction with water are hydrogen and the metal hydroxide. The formation of hydrogen gas indicates that the heavier alkaline earth metals are better reducing agents (more easily oxidized) than is hydrogen. As expected, these metals react with both acids and nonmetals to form ionic compounds. Unlike most salts of the alkali metals, many of the common salts of the alkaline earth metals are insoluble in water because of the high lattice energies of these compounds, containing a divalent metal ion. 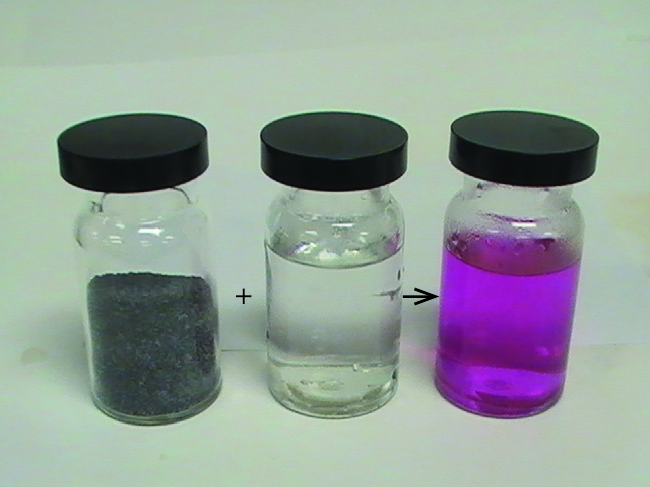 From left to right: Mg(s), warm water at pH 7, and the resulting solution with a pH greater than 7, as indicated by the pink color of the phenolphthalein indicator. (credit: modification of work by Sahar Atwa)

The potent reducing power of hot magnesium is useful in preparing some metals from their oxides. Indeed, magnesium’s affinity for oxygen is so great that burning magnesium reacts with carbon dioxide, producing elemental carbon:

For this reason, a CO2 fire extinguisher will not extinguish a magnesium fire. Additionally, the brilliant white light emitted by burning magnesium makes it useful in flares and fireworks.