Group 12 contains the four elements zinc, cadmium, mercury, and copernicium. Each of these elements has two electrons in its outer shell (ns2). When atoms of these metals form cations with a charge of 2+, where the two outer electrons are lost, they have pseudo-noble gas electron configurations. Mercury is sometimes an exception because it also exhibits an oxidation state of 1+ in compounds that contain a diatomic \({\text{Hg}}_{2}{}^{2+}\) ion. In their elemental forms and in compounds, cadmium and mercury are both toxic.

Zinc is the most reactive in group 12, and mercury is the least reactive. (This is the reverse of the reactivity trend of the metals of groups 1 and 2, in which reactivity increases down a group. The increase in reactivity with increasing atomic number only occurs for the metals in groups 1 and 2.) The decreasing reactivity is due to the formation of ions with a pseudo-noble gas configuration and to other factors that are beyond the scope of this discussion. The chemical behaviors of zinc and cadmium are quite similar to each other but differ from that of mercury.

Zinc and cadmium have lower reduction potentials than hydrogen, and, like the alkali metals and alkaline earth metals, they will produce hydrogen gas when they react with acids. The reaction of zinc with hydrochloric acid, shown in the figure below, is: 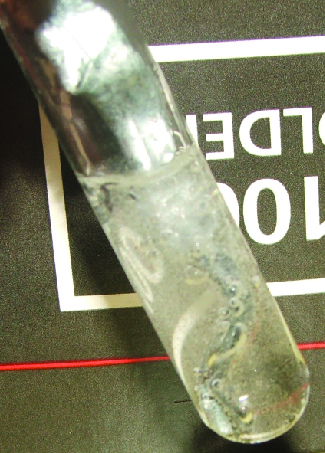 Zinc is an active metal. It dissolves in hydrochloric acid, forming a solution of colorless Zn2+ ions, Cl– ions, and hydrogen gas.

Zinc is a silvery metal that quickly tarnishes to a blue-gray appearance. This change in color is due to an adherent coating of a basic carbonate, Zn2(OH)2CO3, which passivates the metal to inhibit further corrosion. Dry cell and alkaline batteries contain a zinc anode. Brass (Cu and Zn) and some bronze (Cu, Sn, and sometimes Zn) are important zinc alloys.

About half of zinc production serves to protect iron and other metals from corrosion. This protection may take the form of a sacrificial anode (also known as a galvanic anode, which is a means of providing cathodic protection for various metals) or as a thin coating on the protected metal. Galvanized steel is steel with a protective coating of zinc.

A sacrificial anode, or galvanic anode, is a means of providing cathodic protection of various metals. Cathodic protection refers to the prevention of corrosion by converting the corroding metal into a cathode. As a cathode, the metal resists corrosion, which is an oxidation process. Corrosion occurs at the sacrificial anode instead of at the cathode.

The construction of such a system begins with the attachment of a more active metal (more negative reduction potential) to the metal needing protection. Attachment may be direct or via a wire. To complete the circuit, a salt bridge is necessary. This salt bridge is often seawater or ground water. Once the circuit is complete, oxidation (corrosion) occurs at the anode and not the cathode.

The commonly used sacrificial anodes are magnesium, aluminum, and zinc. Magnesium has the most negative reduction potential of the three and serves best when the salt bridge is less efficient due to a low electrolyte concentration such as in freshwater. Zinc and aluminum work better in saltwater than does magnesium. Aluminum is lighter than zinc and has a higher capacity; however, an oxide coating may passivate the aluminum. In special cases, other materials are useful. For example, iron will protect copper.

Mercury is very different from zinc and cadmium. Mercury is the only metal that is liquid at 25 °C. Many metals dissolve in mercury, forming solutions called amalgams (see the feature on Amalgams), which are alloys of mercury with one or more other metals. Mercury, shown in the figure below, is a nonreactive element that is more difficult to oxidize than hydrogen. Thus, it does not displace hydrogen from acids; however, it will react with strong oxidizing acids, such as nitric acid:

The clear NO initially formed quickly undergoes further oxidation to the reddish brown NO2. 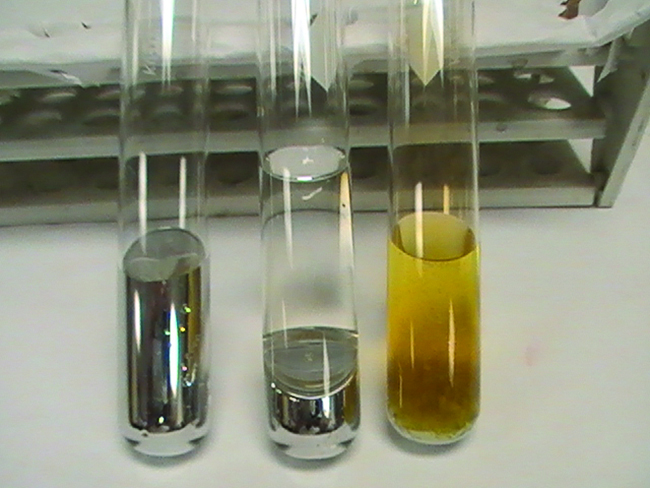 An amalgam is an alloy of mercury with one or more other metals. This is similar to considering steel to be an alloy of iron with other metals. Most metals will form an amalgam with mercury, with the main exceptions being iron, platinum, tungsten, and tantalum.

Due to toxicity issues with mercury, there has been a significant decrease in the use of amalgams. Historically, amalgams were important in electrolytic cells and in the extraction of gold. Amalgams of the alkali metals still find use because they are strong reducing agents and easier to handle than the pure alkali metals.

Prospectors had a problem when they found finely divided gold. They learned that adding mercury to their pans collected the gold into the mercury to form an amalgam for easier collection. Unfortunately, losses of small amounts of mercury over the years left many streams in California polluted with mercury.

Dentists use amalgams containing silver and other metals to fill cavities. There are several reasons to use an amalgam including low cost, ease of manipulation, and longevity compared to alternate materials. Dental amalgams are approximately 50% mercury by weight, which, in recent years, has become a concern due to the toxicity of mercury.

After reviewing the best available data, the Food and Drug Administration (FDA) considers amalgam-based fillings to be safe for adults and children over six years of age. Even with multiple fillings, the mercury levels in the patients remain far below the lowest levels associated with harm. Clinical studies have found no link between dental amalgams and health problems. Health issues may not be the same in cases of children under six or pregnant women. The FDA conclusions are in line with the opinions of the Environmental Protection Agency (EPA) and Centers for Disease Control (CDC). The only health consideration noted is that some people are allergic to the amalgam or one of its components.