The alkali metals lithium, sodium, potassium, rubidium, cesium, and francium constitute group 1 of the periodic table. Although hydrogen is in group 1 (and also in group 17), it is a nonmetal and deserves separate consideration later in this tutorial. The name alkali metal is in reference to the fact that these metals and their oxides react with water to form very basic (alkaline) solutions.

The properties of the alkali metals are similar to each other as expected for elements in the same family. The alkali metals have the largest atomic radii and the lowest first ionization energy in their periods. This combination makes it very easy to remove the single electron in the outermost (valence) shell of each. The easy loss of this valence electron means that these metals readily form stable cations with a charge of 1+. Their reactivity increases with increasing atomic number due to the ease of losing the lone valence electron (decreasing ionization energy). Since oxidation is so easy, the reverse, reduction, is difficult, which explains why it is hard to isolate the elements. The solid alkali metals are very soft; lithium, shown in the figure below, has the lowest density of any metal (0.5 g/cm3).

The alkali metals all react vigorously with water to form hydrogen gas and a basic solution of the metal hydroxide. This means they are easier to oxidize than is hydrogen. As an example, the reaction of lithium with water is: 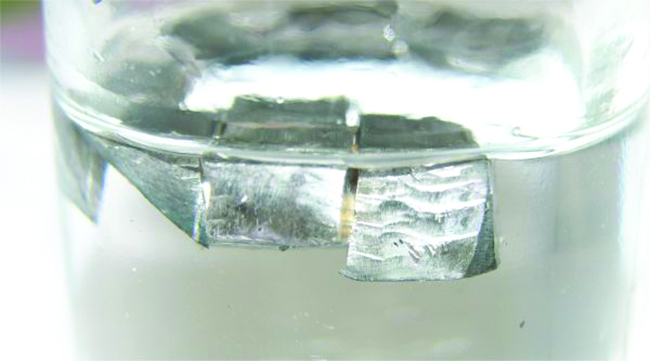 Lithium floats in paraffin oil because its density is less than the density of paraffin oil.

Alkali metals react directly with all the nonmetals (except the noble gases) to yield binary ionic compounds containing 1+ metal ions. These metals are so reactive that it is necessary to avoid contact with both moisture and oxygen in the air. Therefore, they are stored in sealed containers under mineral oil, as shown in the figure below, to prevent contact with air and moisture. The pure metals never exist free (uncombined) in nature due to their high reactivity. In addition, this high reactivity makes it necessary to prepare the metals by electrolysis of alkali metal compounds. 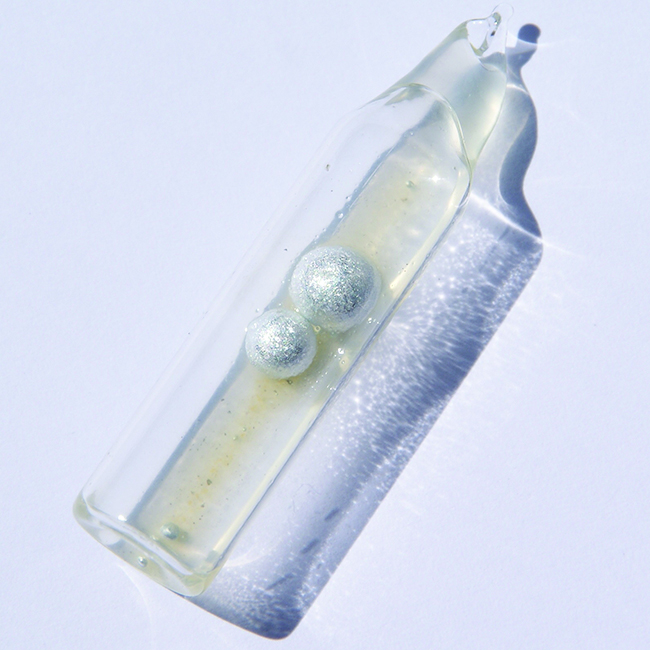 To prevent contact with air and water, potassium for laboratory use comes as sticks or beads stored under kerosene or mineral oil, or in sealed containers. (credit: http://images-of-elements.com/potassium.php)

Unlike many other metals, the reactivity and softness of the alkali metals make these metals unsuitable for structural applications. However, there are applications where the reactivity of the alkali metals is an advantage. For example, the production of metals such as titanium and zirconium relies, in part, on the ability of sodium to reduce compounds of these metals. The manufacture of many organic compounds, including certain dyes, drugs, and perfumes, utilizes reduction by lithium or sodium.

Sodium and its compounds impart a bright yellow color to a flame, as seen in the figure below. Passing an electrical discharge through sodium vapor also produces this color. In both cases, this is an example of an emission spectrum as discussed in the tutorial on electronic structure. Streetlights sometime employ sodium vapor lights because the sodium vapor penetrates fog better than most other light. This is because the fog does not scatter yellow light as much as it scatters white light. The other alkali metals and their salts also impart color to a flame. Lithium creates a bright, crimson color, whereas the others create a pale, violet color.

Dipping a wire into a solution of a sodium salt and then heating the wire causes emission of a bright yellow light, characteristic of sodium.

This video demonstrates the reactions of the alkali metals with water.