Chemistry » Metals, Metalloids, and Nonmetals » Occurrence and Preparation of the Representative Metals

Ions of metals in of groups 1 and 2, along with aluminum, are very difficult to reduce; therefore, it is necessary to prepare these elements by electrolysis, an important process discussed in the tutorial on electrochemistry. Briefly, electrolysis involves using electrical energy to drive unfavorable chemical reactions to completion; it is useful in the isolation of reactive metals in their pure forms. Sodium, aluminum, and magnesium are typical examples.

The Preparation of Sodium

The most important method for the production of sodium is the electrolysis of molten sodium chloride; the set-up is a Downs cell, shown in the figure below. The reaction involved in this process is:

The electrolysis cell contains molten sodium chloride (melting point 801 °C), to which calcium chloride has been added to lower the melting point to 600 °C (a colligative effect). The passage of a direct current through the cell causes the sodium ions to migrate to the negatively charged cathode and pick up electrons, reducing the ions to sodium metal. Chloride ions migrate to the positively charged anode, lose electrons, and undergo oxidation to chlorine gas. The overall cell reaction comes from adding the following reactions:

Separation of the molten sodium and chlorine prevents recombination. The liquid sodium, which is less dense than molten sodium chloride, floats to the surface and flows into a collector. The gaseous chlorine goes to storage tanks. Chlorine is also a valuable product. 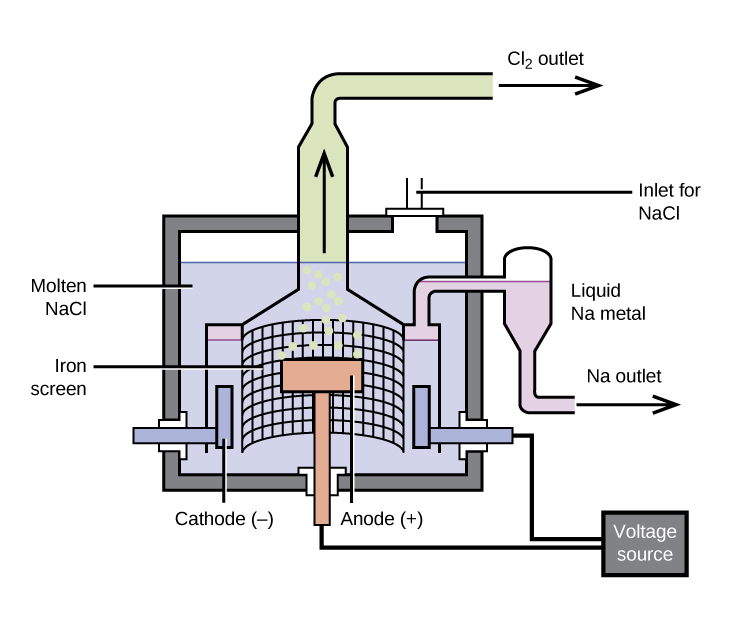 The Preparation of Aluminum

The production of aluminum begins with the purification of bauxite, the most common source of aluminum. The reaction of bauxite, AlO(OH), with hot sodium hydroxide forms soluble sodium aluminate, while clay and other impurities remain undissolved:

After the removal of the impurities by filtration, the addition of acid to the aluminate leads to the reprecipitation of aluminum hydroxide:

The next step is to remove the precipitated aluminum hydroxide by filtration. Heating the hydroxide produces aluminum oxide, Al2O3, which dissolves in a molten mixture of cryolite, Na3AlF6, and calcium fluoride, CaF2. Electrolysis of this solution takes place in a cell like that shown in the figure below. Reduction of aluminum ions to the metal occurs at the cathode, while oxygen, carbon monoxide, and carbon dioxide form at the anode. 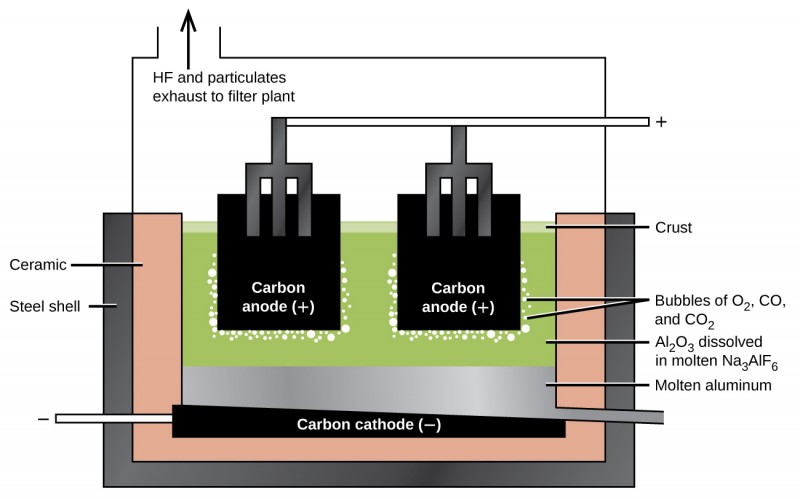 An electrolytic cell is used for the production of aluminum. The electrolysis of a solution of cryolite and calcium fluoride results in aluminum metal at the cathode, and oxygen, carbon monoxide, and carbon dioxide at the anode.

The Preparation of Magnesium

Some production facilities have moved away from electrolysis completely. In the next section, we will see how the Pidgeon process leads to the chemical reduction of magnesium.