Carbon occurs in the uncombined (elemental) state in many forms, such as diamond, graphite, charcoal, coke, carbon black, graphene, and fullerene.

Diamond, shown in the figure below, is a very hard crystalline material that is colorless and transparent when pure. Each atom forms four single bonds to four other atoms at the corners of a tetrahedron (sp3 hybridization); this makes the diamond a giant molecule. Carbon-carbon single bonds are very strong, and, because they extend throughout the crystal to form a three-dimensional network, the crystals are very hard and have high melting points (~4400 °C).

(a) Diamond and (b) graphite are two forms of carbon. (c) In the crystal structure of diamond, the covalent bonds form three-dimensional tetrahedrons. (d) In the crystal structure of graphite, each planar layer is composed of six-membered rings. (credit a: modification of work by “Fancy Diamonds”/Flickr; credit b: modification of work from http://images-of-elements.com/carbon.php)

Graphite, also shown in the figure above, is a soft, slippery, grayish-black solid that conducts electricity. These properties relate to its structure, which consists of layers of carbon atoms, with each atom surrounded by three other carbon atoms in a trigonal planar arrangement. Each carbon atom in graphite forms three σ bonds, one to each of its nearest neighbors, by means of sp2-hybrid orbitals. The unhybridized p orbital on each carbon atom will overlap unhybridized orbitals on adjacent carbon atoms in the same layer to form π bonds. Many resonance forms are necessary to describe the electronic structure of a graphite layer; the figure below illustrates two of these forms.

(a) Carbon atoms in graphite have unhybridized p orbitals. Each p orbital is perpendicular to the plane of carbon atoms. (b) These are two of the many resonance forms of graphite necessary to describe its electronic structure as a resonance hybrid.

Atoms within a graphite layer are bonded together tightly by the σ and π bonds; however, the forces between layers are weak. London dispersion forces hold the layers together. To learn more, see the discussion of these weak forces in the tutorial on liquids and solids. The weak forces between layers give graphite the soft, flaky character that makes it useful as the so-called “lead” in pencils and the slippery character that makes it useful as a lubricant. The loosely held electrons in the resonating π bonds can move throughout the solid and are responsible for the electrical conductivity of graphite.

Other forms of elemental carbon include carbon black, charcoal, and coke. Carbon black is an amorphous form of carbon prepared by the incomplete combustion of natural gas, CH4. It is possible to produce charcoal and coke by heating wood and coal, respectively, at high temperatures in the absence of air.

Recently, new forms of elemental carbon molecules have been identified in the soot generated by a smoky flame and in the vapor produced when graphite is heated to very high temperatures in a vacuum or in helium. One of these new forms, first isolated by Professor Richard Smalley and coworkers at Rice University, consists of icosahedral (soccer-ball-shaped) molecules that contain 60 carbon atoms, C60. This is buckminsterfullerene (often called bucky balls) after the architect Buckminster Fuller, who designed domed structures, which have a similar appearance (see the figure below). 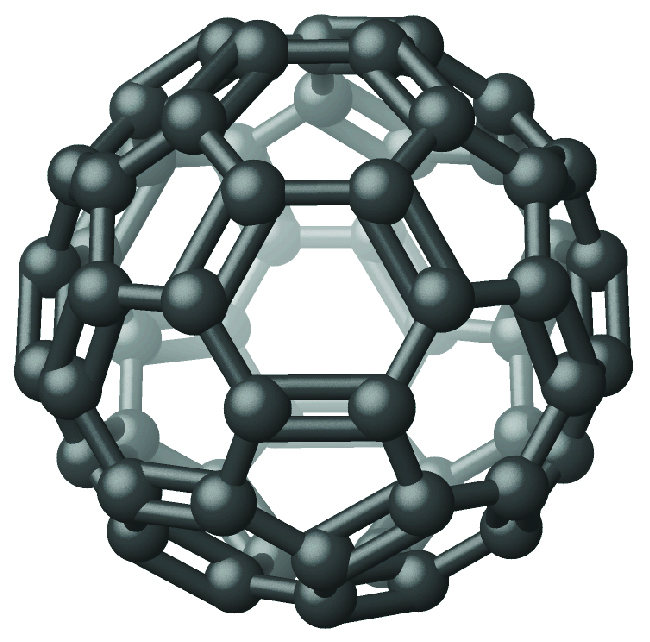 The molecular structure of C60, buckminsterfullerene, is icosahedral.