Biology » Meiosis and Sexual Reproduction » The Process of Meiosis

Meiosis is preceded by an interphase consisting of the G1, S, and G2 phases, which are nearly identical to the phases preceding mitosis. The G1 phase, which is also called the first gap phase, is the first phase of the interphase and is focused on cell growth. The S phase is the second phase of interphase, during which the DNA of the chromosomes is replicated. Finally, the G2 phase, also called the second gap phase, is the third and final phase of interphase; in this phase, the cell undergoes the final preparations for meiosis.

During DNA duplication in the S phase, each chromosome is replicated to produce two identical copies, called sister chromatids, that are held together at the centromere by cohesin proteins. Cohesin holds the chromatids together until anaphase II. The centrosomes, which are the structures that organize the microtubules of the meiotic spindle, also replicate. This prepares the cell to enter prophase I, the first meiotic phase.

In species such as humans, even though the X and Y sex chromosomes are not homologous (most of their genes differ), they have a small region of homology that allows the X and Y chromosomes to pair up during prophase I. A partial synaptonemal complex develops only between the regions of homology. 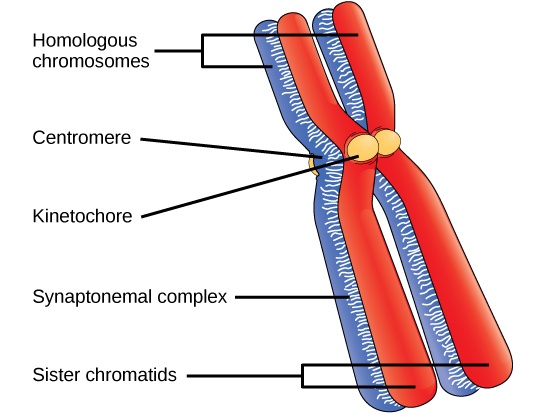 Early in prophase I, homologous chromosomes come together to form a synapse. The chromosomes are bound tightly together and in perfect alignment by a protein lattice called a synaptonemal complex and by cohesin proteins at the centromere.

Located at intervals along the synaptonemal complex are large protein assemblies called recombination nodules. These assemblies mark the points of later chiasmata and mediate the multistep process of crossover—or genetic recombination—between the non-sister chromatids.

Near the recombination nodule on each chromatid, the double-stranded DNA is cleaved, the cut ends are modified, and a new connection is made between the non-sister chromatids. As prophase I progresses, the synaptonemal complex begins to break down and the chromosomes begin to condense. When the synaptonemal complex is gone, the homologous chromosomes remain attached to each other at the centromere and at chiasmata. The chiasmata remain until anaphase I.

The number of chiasmata varies according to the species and the length of the chromosome. There must be at least one chiasma per chromosome for proper separation of homologous chromosomes during meiosis I, but there may be as many as 25. Following crossover, the synaptonemal complex breaks down and the cohesin connection between homologous pairs is also removed. At the end of prophase I, the pairs are held together only at the chiasmata (see the figure below) and are called tetrads because the four sister chromatids of each pair of homologous chromosomes are now visible.

Now, when that sister chromatid is moved into a gamete cell it will carry some DNA from one parent of the individual and some DNA from the other parent. The sister recombinant chromatid has a combination of maternal and paternal genes that did not exist before the crossover. Multiple crossovers in an arm of the chromosome have the same effect, exchanging segments of DNA to create recombinant chromosomes. 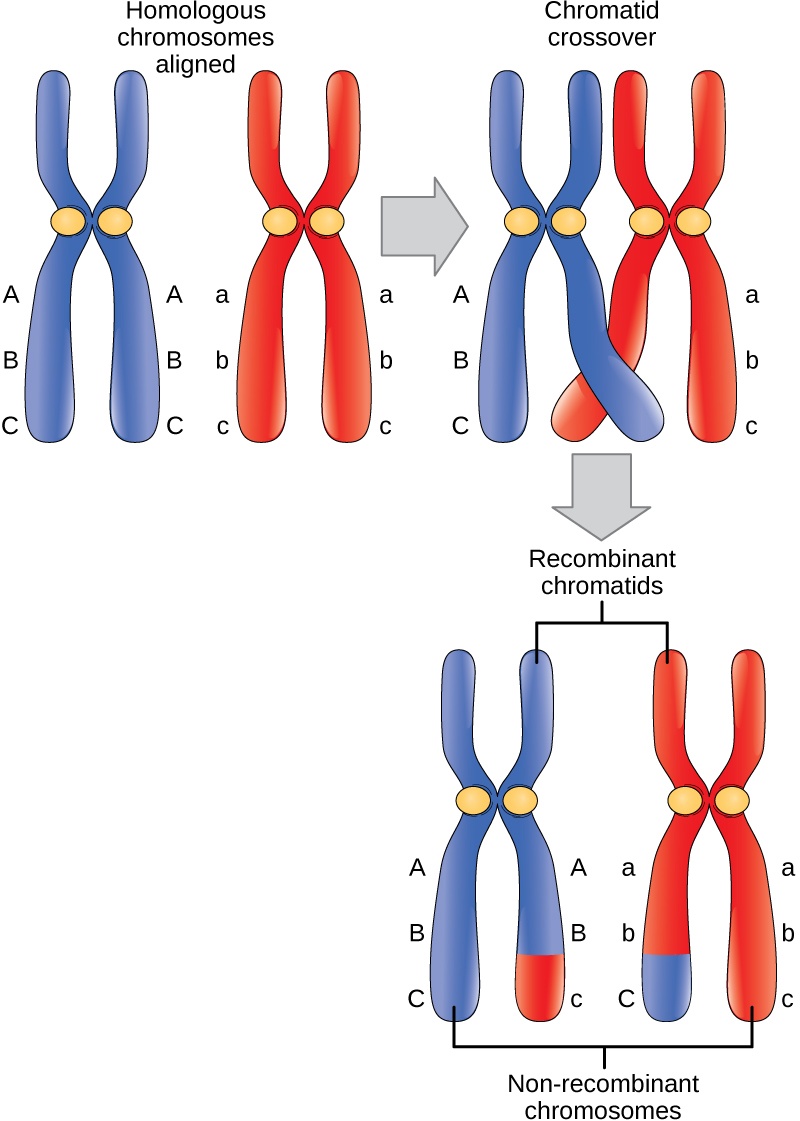 This randomness is the physical basis for the creation of the second form of genetic variation in offspring. Consider that the homologous chromosomes of a sexually reproducing organism are originally inherited as two separate sets, one from each parent. Using humans as an example, one set of 23 chromosomes is present in the egg donated by the mother.

This event—the random (or independent) assortment of homologous chromosomes at the metaphase plate—is the second mechanism that introduces variation into the gametes or spores. In each cell that undergoes meiosis, the arrangement of the tetrads is different. The number of variations is dependent on the number of chromosomes making up a set.

There are two possibilities for orientation at the metaphase plate; the possible number of alignments therefore equals 2n, where n is the number of chromosomes per set. Humans have 23 chromosome pairs, which results in over eight million (223) possible genetically-distinct gametes. This number does not include the variability that was previously created in the sister chromatids by crossover. Given these two mechanisms, it is highly unlikely that any two haploid cells resulting from meiosis will have the same genetic composition (see the figure below).

To summarize the genetic consequences of meiosis I, the maternal and paternal genes are recombined by crossover events that occur between each homologous pair during prophase I. In addition, the random assortment of tetrads on the metaphase plate produces a unique combination of maternal and paternal chromosomes that will make their way into the gametes. 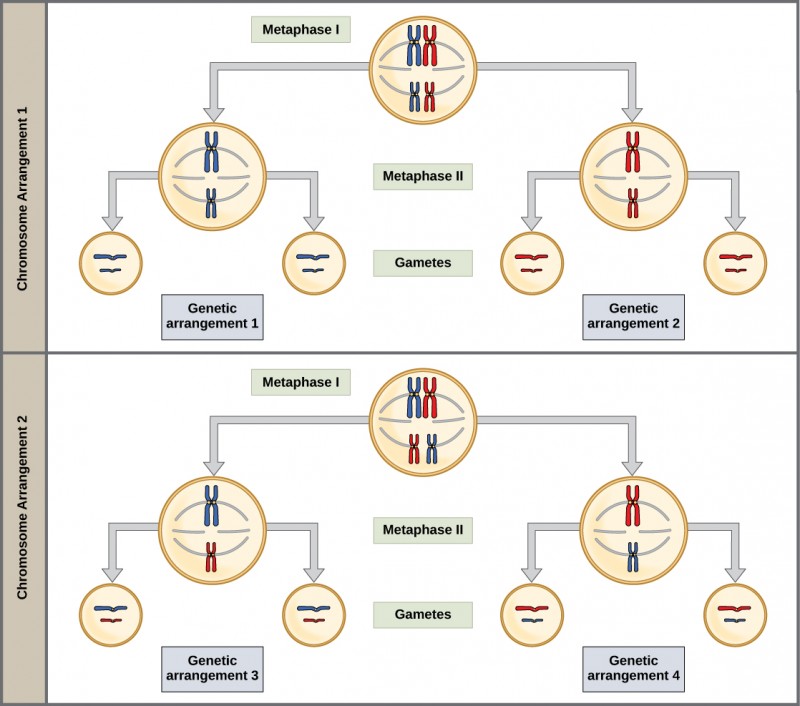 Random, independent assortment during metaphase I can be demonstrated by considering a cell with a set of two chromosomes (n = 2). In this case, there are two possible arrangements at the equatorial plane in metaphase I. The total possible number of different gametes is 2n, where n equals the number of chromosomes in a set. In this example, there are four possible genetic combinations for the gametes. With n = 23 in human cells, there are over 8 million possible combinations of paternal and maternal chromosomes. 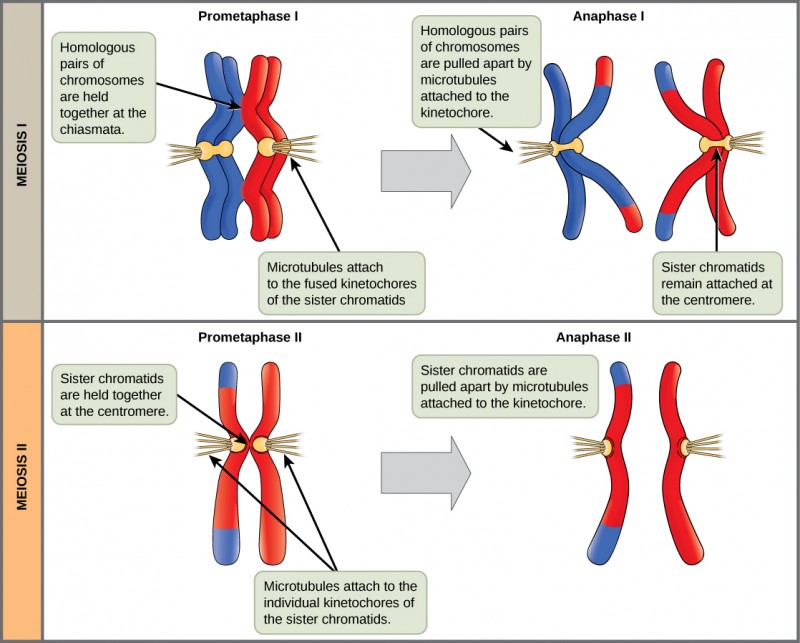 Telophase I and Cytokinesis

In telophase, the separated chromosomes arrive at opposite poles. The remainder of the typical telophase events may or may not occur, depending on the species. In some organisms, the chromosomes decondense and nuclear envelopes form around the chromatids in telophase I. In other organisms, cytokinesis—the physical separation of the cytoplasmic components into two daughter cells—occurs without reformation of the nuclei.

In nearly all species of animals and some fungi, cytokinesis separates the cell contents via a cleavage furrow (constriction of the actin ring that leads to cytoplasmic division). In plants, a cell plate is formed during cell cytokinesis by Golgi vesicles fusing at the metaphase plate. This cell plate will ultimately lead to the formation of cell walls that separate the two daughter cells.

You can watch the video below to review the process of meiosis, observing how chromosomes align and migrate.

This is a lesson from the tutorial, Meiosis and Sexual Reproduction and you are encouraged to log in or register, so that you can track your progress.