Nearly all animals employ a diploid-dominant life-cycle strategy in which the only haploid cells produced by the organism are the gametes. Early in the development of the embryo, specialized diploid cells, called germ cells, are produced within the gonads, such as the testes and ovaries. Germ cells are capable of mitosis to perpetuate the cell line and meiosis to produce gametes. Once the haploid gametes are formed, they lose the ability to divide again. There is no multicellular haploid life stage. Fertilization occurs with the fusion of two gametes, usually from different individuals, restoring the diploid state (see the figure below). 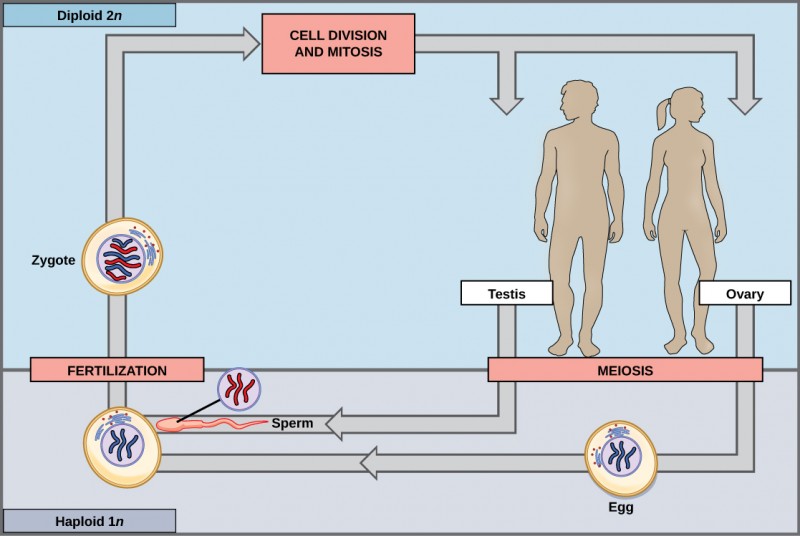 In animals, sexually reproducing adults form haploid gametes from diploid germ cells. Fusion of the gametes gives rise to a fertilized egg cell, or zygote. The zygote will undergo multiple rounds of mitosis to produce a multicellular offspring. The germ cells are generated early in the development of the zygote.

Most fungi and algae employ a life-cycle type in which the “body” of the organism—the ecologically important part of the life cycle—is haploid. The haploid cells that make up the tissues of the dominant multicellular stage are formed by mitosis. During sexual reproduction, specialized haploid cells from two individuals, designated the (+) and (−) mating types, join to form a diploid zygote.

The zygote immediately undergoes meiosis to form four haploid cells called spores. Although haploid like the “parents,” these spores contain a new genetic combination from two parents. The spores can remain dormant for various time periods. Eventually, when conditions are conducive, the spores form multicellular haploid structures by many rounds of mitosis (see the figure below). 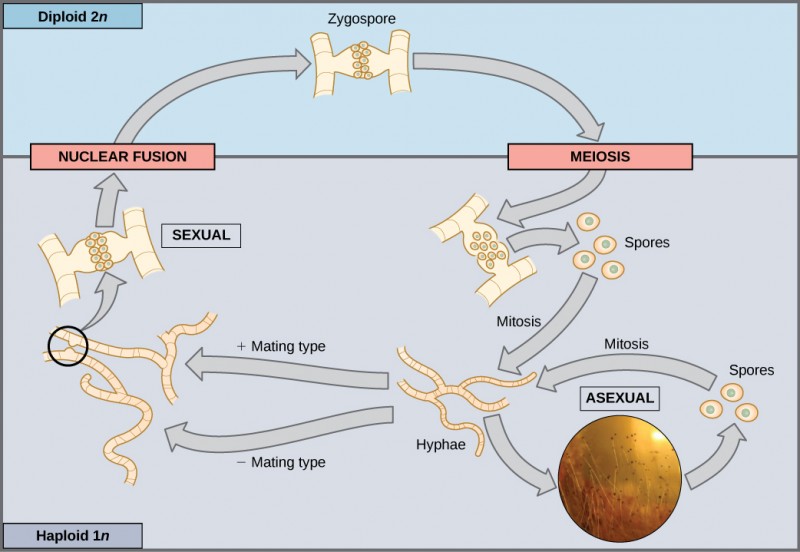 If a mutation occurs so that a fungus is no longer able to produce a minus mating type, will it still be able to reproduce?

Yes, it will be able to reproduce asexually.

The third life-cycle type, employed by some algae and all plants, is a blend of the haploid-dominant and diploid-dominant extremes. Species with alternation of generations have both haploid and diploid multicellular organisms as part of their life cycle. The haploid multicellular plants are called gametophytes, because they produce gametes from specialized cells. Meiosis is not directly involved in the production of gametes in this case, because the organism that produces the gametes is already a haploid.

Fertilization between the gametes forms a diploid zygote. The zygote will undergo many rounds of mitosis and give rise to a diploid multicellular plant called a sporophyte. Specialized cells of the sporophyte will undergo meiosis and produce haploid spores. The spores will subsequently develop into the gametophytes (see the figure below). 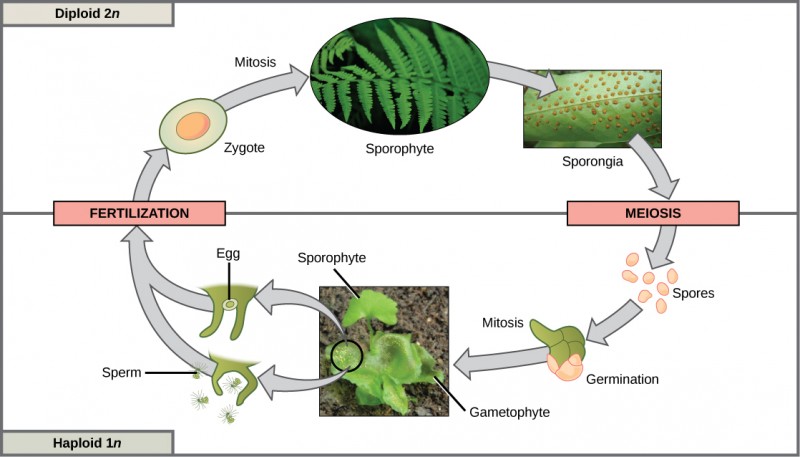 Sexual reproduction takes many forms in multicellular organisms. However, at some point in each type of life cycle, meiosis produces haploid cells that will fuse with the haploid cell of another organism. The mechanisms of variation—crossover, random assortment of homologous chromosomes, and random fertilization—are present in all versions of sexual reproduction. The fact that nearly every multicellular organism on Earth employs sexual reproduction is strong evidence for the benefits of producing offspring with unique gene combinations, though there are other possible benefits as well.

This is a lesson from the tutorial, Meiosis and Sexual Reproduction and you are encouraged to log in or register, so that you can track your progress.