Animals like dolphins and bats make use of sounds waves to find their way. Just like ships on the ocean, bats use sonar to navigate. Waves that are sent out are reflected off the objects around the animal. Bats, or dolphins, then use the reflected sounds to form a “picture” of their surroundings. This is called echolocation. 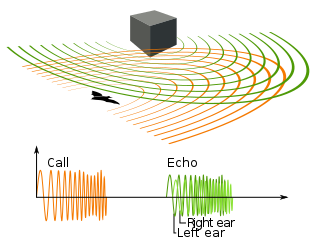 A depiction of the ultrasound signals emitted by a bat, and the echo from a nearby object. Image credit: Wikimedia Commons, public domain

Echolocation, also called bio sonar, is the biological sonar used by several kinds of animals. Echolocating animals emit calls out to the environment and listen to the echoes of those calls that return from various objects near them. They use these echoes to locate and identify the objects. Echolocation is used for navigation and for foraging (or hunting) in various environments.

Echolocating animals include some mammals and a few birds; most notably microchiropteran bats and  odontocetes (toothed whales and dolphins), but also in simpler form in other groups such as shrews, one genus of megachiropteran bats (Rousettus) and two cave dwelling bird groups, the so-called cave swiftlets in the genus Aerodramus (formerly Collocalia) and the unrelated Oilbird Steatornis caripensis.

This article has been modified from

This is a lesson from the tutorial, Mechanical Waves and Sound and you are encouraged to log in or register, so that you can track your progress.