Echinodermata are so named owing to their spiny skin (from the Greek “echinos” meaning “spiny” and “dermos” meaning “skin”), and this phylum is a collection of about 7,000 described living species. Echinodermata are exclusively marine organisms. Sea stars (see the figure below), sea cucumbers, sea urchins, sand dollars, and brittle stars are all examples of echinoderms. To date, no freshwater or terrestrial echinoderms are known.

Adult echinoderms exhibit pentaradial symmetry and have a calcareous endoskeleton made of ossicles, although the early larval stages of all echinoderms have bilateral symmetry. The endoskeleton is developed by epidermal cells and may possess pigment cells, giving vivid colors to these animals, as well as cells laden with toxins. Gonads are present in each arm. In echinoderms like sea stars, every arm bears two rows of tube feet on the oral side. These tube feet help in attachment to the substratum. These animals possess a true coelom that is modified into a unique circulatory system called a water vascular system. An interesting feature of these animals is their power to regenerate, even when over 75 percent of their body mass is lost. 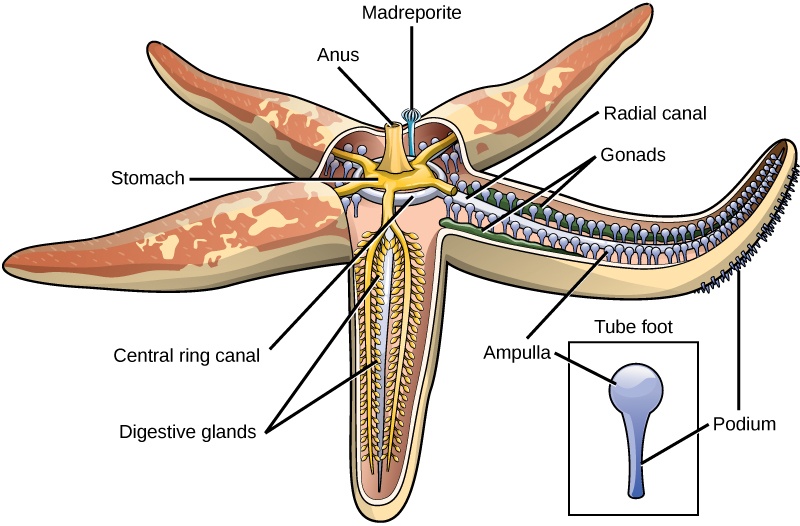 This diagram shows the anatomy of a sea star.

Echinoderms possess a unique ambulacral or water vascular system, consisting of a central ring canal and radial canals that extend along each arm. Water circulates through these structures and facilitates gaseous exchange as well as nutrition, predation, and locomotion. The water vascular system also projects from holes in the skeleton in the form of tube feet. These tube feet can expand or contract based on the volume of water present in the system of that arm.

By using hydrostatic pressure, the animal can either protrude or retract the tube feet. Water enters the madreporite on the aboral side of the echinoderm. From there, it passes into the stone canal, which moves water into the ring canal. The ring canal connects the radial canals (there are five in a pentaradial animal), and the radial canals move water into the ampullae, which have tube feet through which the water moves. By moving water through the unique water vascular system, the echinoderm can move and force open mollusk shells during feeding.

The nervous system in these animals is a relatively simple structure with a nerve ring at the center and five radial nerves extending outward along the arms. Structures analogous to a brain or derived from fusion of ganglia are not present in these animals.

Podocytes, cells specialized for ultrafiltration of bodily fluids, are present near the center of echinoderms. These podocytes are connected by an internal system of canals to an opening called the madreporite.

Echinoderms are sexually dimorphic and release their eggs and sperm cells into water; fertilization is external. In some species, the larvae divide asexually and multiply before they reach sexual maturity. Echinoderms may also reproduce asexually, as well as regenerate body parts lost in trauma.

This is a lesson from the tutorial, Invertebrates and you are encouraged to log in or register, so that you can track your progress.