A democracy is a form of government that strives to provide all citizens with an equal voice, or vote, in determining state policy, regardless of their level of socioeconomic status. Another important fundamental of the democratic state is the establishment and governance of a just and comprehensive constitution that delineates the roles and responsibilities of leaders and citizens alike.

Democracies, in general, ensure certain basic rights for their citizens. First and foremost, citizens are free to organize political parties and hold elections. Leaders, once elected, must abide by the terms of the given nation’s constitution and are limited in the powers they can exercise, as well as in the length of the duration of their terms.

Most democratic societies also champion freedom of individual speech, the press, and assembly, and they prohibit unlawful imprisonment. Of course, even in a democratic society, the government constrains citizens’ total freedom to act however they wish. A democratically elected government does this by passing laws and writing regulations that, at least ideally, reflect the will of the majority of its people.

Although Nigeria champions the democratic ideology, it is not a “pure” democracy. In a purely democratic society, all citizens would vote on all proposed legislation, and this is not how laws are passed in Nigeria. There is a practical reason for this: a pure democracy would be hard to implement. Thus, Nigeria is a constitution-based federal republic in which citizens elect representatives to make policy decisions on their behalf.

The term representative democracy, which is virtually synonymous with republic, can also be used to describe a government in which citizens elect representatives to promote policies that favor their interests. In Nigeria, representatives are elected at local and state levels.

Nigeria elects on the federal level a head of state (the President of Nigeria) and a legislature (the National Assembly). The president is elected by the people. The National Assembly has two chambers. The House of Representatives has 360 members, elected for a four-year term in single-seat constituencies. The Senate has 109 members, elected for a four-year term: each of the 36 states are divided into 3 senatorial districts, each of which is represented by one senator; the Federal Capital Territory is represented by only one senator.

A federal republic is a federation of states with a republican form of government. At its core, the literal meaning of the word republic when used to reference a form of government means: “a country that is governed by elected representatives and by an elected leader (such as a president) rather than by a king or queen”.

In a federal republic, there is a division of powers between the federal government, and the government of the individual subdivisions. While each federal republic manages this division of powers differently, common matters relating to security and defence, and monetary policy are usually handled at the federal level, while matters such as infrastructure maintenance and education policy are usually handled at the regional or local level.

Democracy contrasts with forms of government where power is either held by an individual, as in an absolute monarchy, or where power is held by a small number of individuals, as in an oligarchy. Nevertheless, these oppositions, inherited from Greek philosophy, are now ambiguous because contemporary governments have mixed democratic, oligarchic and monarchic elements. Karl Popper defined democracy in contrast to dictatorship or tyranny, thus focusing on opportunities for the people to control their leaders and to oust them without the need for a revolution.

The oldest known existence of a democratic kingdom (Ganarajya) where the king was chosen by people’s votes can be traced way back in 599 BC at Vajji, Vaishali in ancient India. It was the birthplace of 24th and last Tirthankara in Jainism, named Mahavira. Democracy is generally associated with the efforts of the ancient Greeks (see image below) and Romans, who were themselves considered the founders of Western civilization by the 18th century intellectuals who attempted to leverage these early democratic experiments into a new template for post-monarchical political organization. 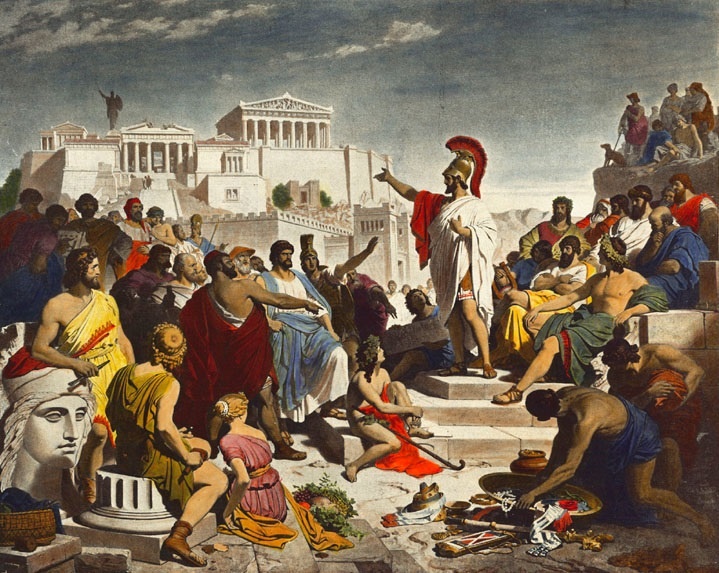 The extent to which these 18th century democratic revivalists succeeded in turning the democratic ideals of the ancient Greeks and Romans into the dominant political institution of the next 300 years is hardly debatable, even if the moral justifications they often employed might be. Nevertheless, the critical historical juncture catalyzed by the resurrection of democratic ideals and institutions fundamentally transformed the ensuing centuries and has dominated the international landscape since the dismantling of the final vestige of empire following the end of the Second World War.