The Methods of Biology: Observing and Hypothesizing

Even though biologists and other scientists study many different types of things, they all use the same basic steps. The common steps they use to do research and answer questions are called scientific methods. Scientists often figure out questions to ask and answer just by observing the world around them.

Science investigation and research requires many skills and processes to come together in order to be successful and worthwhile.

What is the scientific method?

The scientific method is the basic skill process in the world of science. Since the beginning of time humans have been curious as to why and how things happen in the world around us.

A step-by-step guide to the scientific method

Scientists are curious people, and most investigations arise from a scientist noticing something that they don’t understand. Therefore the first step to any scientific investigation is: 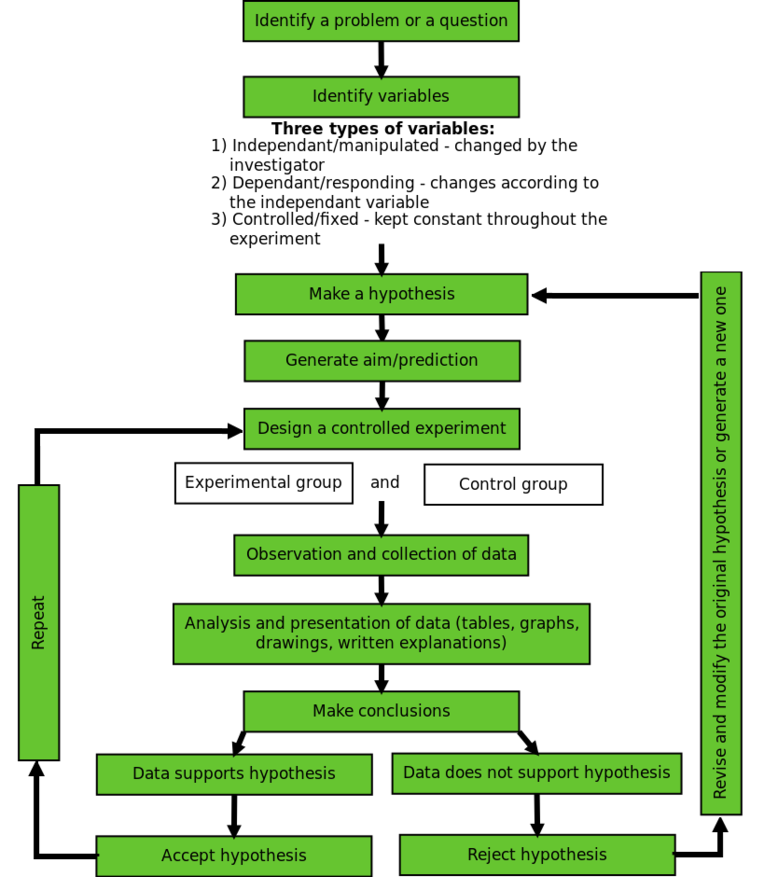 A step-by-step guide to the scientific method.

Once you have a general question, background research needs to be undertaken. Your background research will ensure that you are not investigating something that has already been researched and answered. It will also tell you about interesting connections, theories, explanations and methods that people have used in the past to answer questions related to yours.

Science always builds on the work of others, and it ensures that our theories are constantly improved and refined. It is important to acknowledge the work of the people upon whose work your theory relies in the form of referencing. It is also vital to communicate your findings so that future scientists can use use your work as a basis for future research.

Your background research will help you identify the factors that influence your question. Factors that might change during the experiment are called variables.

Different types of variables are given special names. Below is a list of some important variable types:

Example: In this investigation, variables might include: the amount of sunshine, the types of soil in which the tomatoes are growing, the water available to each of the plants, etc. To which variable type does each factor belong?

Write down a statement or prediction as to what you think will be the outcome or result of your investigation. This is your hypothesis. The hypothesis should:

Example: During your background research you would have learnt that tomatoes need sunshine to make food through photosynthesis. You may predict that plants that get more sun will make more food and grow bigger. In this case your hypothesis would be: I think that the more sunlight a tomato plant receives, the larger the tomatoes will grow’.

To test the hypothesis in life Sciences, you can follow the step-by-step guide which is outlined below.

Example: In this case, your aim would be: to investigate the effect of different amounts of sunlight on tomatoes.

In science we never ‘prove’ a hypothesis through a single experiment because there is a chance that you made an error somewhere along the way, or there may be an alternate explanation for the results that you observe. What you can say is that your results SUPPORT the original hypothesis.

Optional Video: The Times and Troubles of the Scientific Method