Biology » Introducing the Cell » Molecular Make Up Of Cells

Cells are the basic structural and functional units of all living organisms. Cells are made up of the compounds you learnt about in the previous chapter: carbohydrates, fats, proteins, nucleic acids and water. The word ‘cell’ was first used by the 17th century scientist Robert Hooke to describe the small pores in a cork that he observed under a microscope. Cells are very small structures. There is no simple consensus on the number of cells in human body. However, the human body is made up of about 1013 cells. Each of these is too small to see with the human eye and it is through the development of microscopic techniques that we have been better able to visualise and understand them.

Early attempts to magnify images of objects through grinding of glass lenses eventually gave rise to the earliest microscope. In 1600, Anton van Leeuwenhoek, a Dutch microbiologist used a simple microscope with only one lens to observe blood cells. He was the first scientist to describe cells and bacteria through observation under microscope. By combining two or more lenses, the magnification of the microscopes was improved, thus allowing scientists to view smaller structures.

The dissecting microscope is an optical microscope used to view images in three dimensions at low resolution. It is useful for low-level magnification of live tissue. The development of the light microscope, (see figure below) which uses visible light to magnify images allowed for up to 1000X magnification of objects through which scientists were able to view individual cells and internal cell structures such as the cell wall, membrane, mitochondria and chloroplasts.

With the development of electron microscopes the microscopic detail of organelles such as mitochondria and chloroplasts became easier to observe. The Transmission Electron Microscope (TEM) was developed first, followed by the Scanning Electron Microscope (SEM). TEM is used to view extremely thin sections of material. Beams of electrons pass through the material and are focused by electromagnetic lenses.

In SEM the electrons are bounced off the surface of the material and thus produce a detailed image of the external surface of the material. They produce a 3D image by picking up secondary electrons knocked off the surface with an electron collector. The image is then amplified and viewed on a screen. Examples of each of the image types produced by these microscopes are given in the figures below.

Sections for TEM have to be so thin that they have to be prepared using a special piece of equipment called an ultramicrotome. 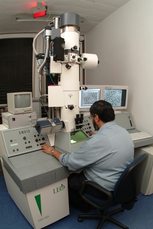 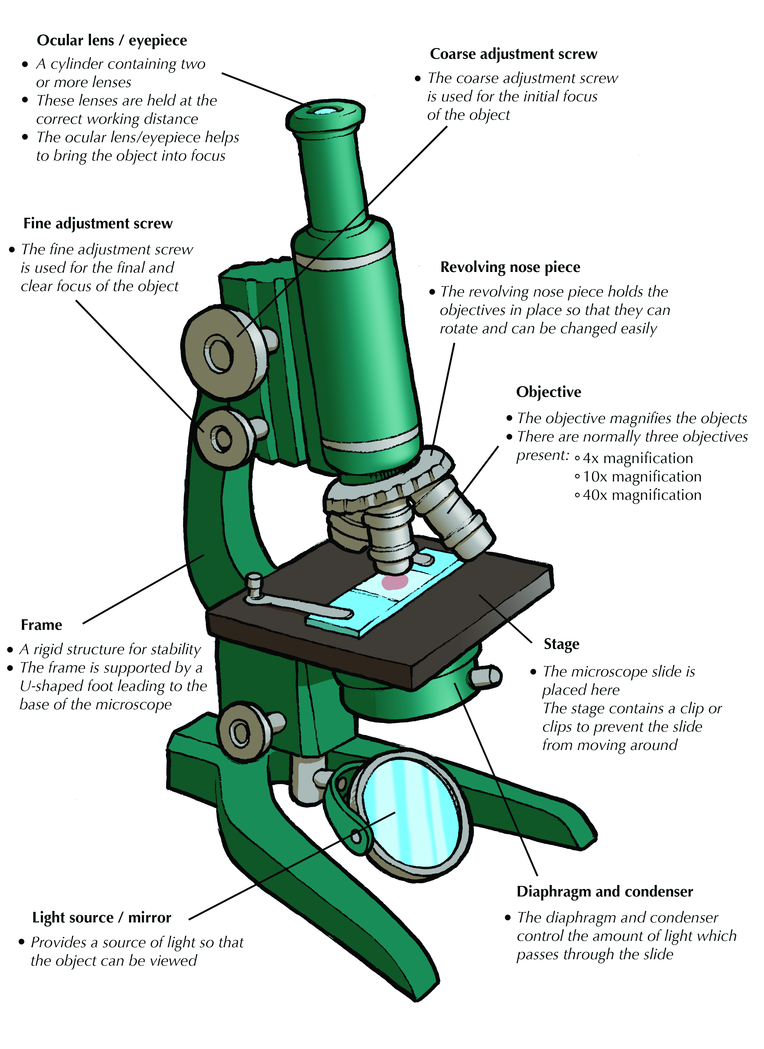 The ocular, rotating nosepiece and objectives are held above the stage by the arm.