Animal cells contain a special organelle called a centriole. The centriole is a cylindrical tube-like structure that is composed of 9 microtubules arranged in a very particular pattern. Two centrioles arranged perpendicular to each other are referred to as a centrosome. The centrosome plays a very important role in cell division. The centrioles are responsible for organising the microtubules that position the chromosomes in the correct location during cell division. You will learn more about their function in the next set of lessons on cell division. 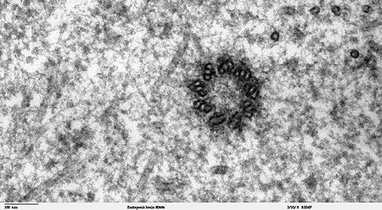 Plastids are organelles found only in plants. There are 3 different types:

The colour of plant flowers such as an orchid is controlled by a specialised organelle in a cell known as the chromoplast.

The chloroplast is a double-membraned organelle. Within the double membrane is a gel-like substance called stroma. Stroma contains enzymes for photosynthesis. Suspended in the stroma are stack-like structures called grana (singular = granum). Each granum is a stack of thylakoid discs. The chlorophyll molecules (green pigments) are found on the surface of the thylakoid discs. Chlorophyll absorbs energy from the sun in order for photosynthesis to take place in the chloroplasts. The grana are connected by lamellae (intergrana). The lamellae keep the stacks apart from each other.

The structure of the chloroplast is neatly adapted to its function of trapping and storing energy in plants. For example, chloroplasts contain a high density of thylakoid discs and numerous grana to allow for increased surface area for the absorption of sunlight, thus producing a high quantity of food for the plant. Additionally, the lamellae keeping the thylakoids apart maximise chloroplast efficiency, thus allowing as much light as possible to be absorbed in the smallest surface area.

Video: Inner Life of a Cell

Harvard University selected XVIVO to develop an animation that would take their cellular biology students on a journey through the microscopic world of a cell, illustrating mechanisms that allow a white blood cell to sense its surroundings and respond to an external stimulus. This award winning piece was the first topic in a series of animations XVIVO is creating for Harvard’s educational website BioVisions at Harvard. Watch the animation below.