The cell theory developed in 1839 by microbiologists Schleiden and Schwann describes the properties of cells. It is an explanation of the relationship between cells and living things. The theory states:

The cell theory applies to all living things, however big or small. The modern understanding of cell theory extends the concepts of the original cell theory to include the following:

DNA (the hereditary information of cells) is passed from ‘parent’ cells to ‘daughter’ cells during cell division. You will learn more about this in the next few lessons.

Cells are the smallest form of life; the functional and structural units of all living things. Your body contains several billion cells, organised into over 200 major types, with hundreds of cell-specific functions.

Some functions performed by cells are so vital to the existence of life that all cells perform them (e.g. cellular respiration). Others are highly specialised (e.g. photosynthesis).

The figure below shows a two-dimensional drawing of an animal cell. The diagram shows the structures visible within a cell at high magnification. The structures form the ultrastructure of the cell. 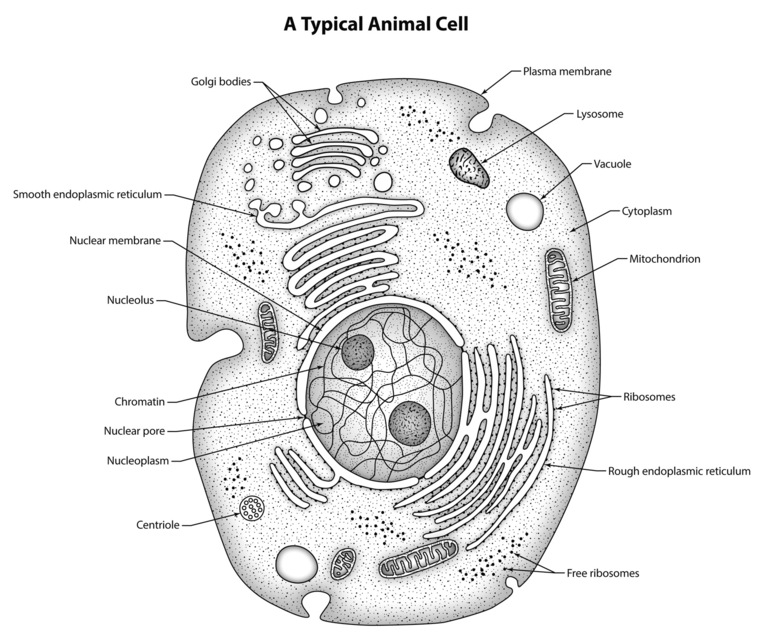 Diagrams of the cell are very well understood but they often give us the wrong impression about how complicated cells really are. Even though, scientists have discovered many cell organelles and now understand their structures and functions in the cell, there’s still a lot that remains to be discovered or fully understood about the cell.

In the next set of lessons, we will begin to look at some of the basic cell structures and organelles in animal and plant cells.

The Amoeba Sisters video below provides a brief tour of the cell. It compares and contrasts prokaryote cells and eukaryote cells before exploring organelle structures and functions. It should help make visualizing the next set of lessons easier.