The cell membrane, also called the plasma membrane, is composed of a double layer of lipids (fats) called a phospholipid bilayer. It physically separates the intracellular (inside cell) space from the extracellular (outside cell) environment. All plant and animal cells have cell membranes. The cell membrane surrounds the cytoplasm which is part of the protoplasm and is the living component of the cell.

The lipid bilayer forms spontaneously due to the properties of the phospholipids from which it is made. The majority of the lipid structure, the fatty acid chain, is non-polar (uncharged). Non-polar substances are unable to dissolve in water and are therefore known as hydrophobic compounds. Some lipids also contain polar (charged) regions. Polar substances can dissolve in water and are known as hydrophilic (water-loving) compounds. The bilayer forms because hydrophilic heads point outwards and from hydrogen bonds with water, and the hydrophobic tails point towards one another. 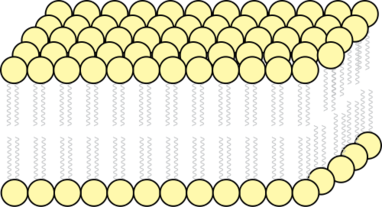 Recall the structure of lipid molecules from Biology 101.

Video: About the Cell Membrane

Watch the video below to learn about basic structure of the cell membrane.