The periods that followed the Cambrian during the Paleozoic Era are marked by further animal evolution and the emergence of many new orders, families, and species. As animal phyla continued to diversify, new species adapted to new ecological niches. During the Ordovician period, which followed the Cambrian period, plant life first appeared on land. This change allowed formerly aquatic animal species to invade land, feeding directly on plants or decaying vegetation. Continual changes in temperature and moisture throughout the remainder of the Paleozoic Era due to continental plate movements encouraged the development of new adaptations to terrestrial existence in animals, such as limbed appendages in amphibians and epidermal scales in reptiles.

Changes in the environment often create new niches (living spaces) that contribute to rapid speciation and increased diversity. On the other hand, cataclysmic events, such as volcanic eruptions and meteor strikes that obliterate life, can result in devastating losses of diversity. Such periods of mass extinction (see the figure below) have occurred repeatedly in the evolutionary record of life, erasing some genetic lines while creating room for others to evolve into the empty niches left behind. The end of the Permian period (and the Paleozoic Era) was marked by the largest mass extinction event in Earth’s history, a loss of roughly 95 percent of the extant species at that time.

Some of the dominant phyla in the world’s oceans, such as the trilobites, disappeared completely. On land, the disappearance of some dominant species of Permian reptiles made it possible for a new line of reptiles to emerge, the dinosaurs. The warm and stable climatic conditions of the ensuing Mesozoic Era promoted an explosive diversification of dinosaurs into every conceivable niche in land, air, and water. Plants, too, radiated into new landscapes and empty niches, creating complex communities of producers and consumers, some of which became very large on the abundant food available. 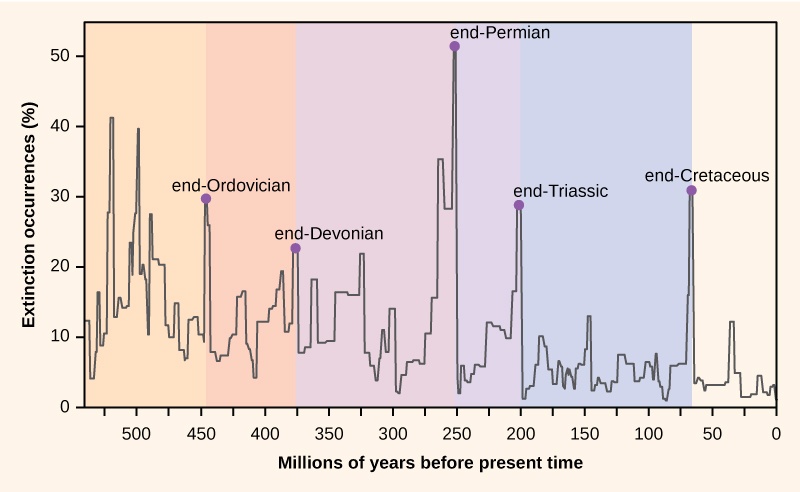 Another mass extinction event occurred at the end of the Cretaceous period, bringing the Mesozoic Era to an end. Skies darkened and temperatures fell as a large meteor impact and tons of volcanic ash blocked incoming sunlight. Plants died, herbivores and carnivores starved, and the mostly cold-blooded dinosaurs ceded their dominance of the landscape to more warm-blooded mammals. In the following Cenozoic Era, mammals radiated into terrestrial and aquatic niches once occupied by dinosaurs, and birds, the warm-blooded offshoots of one line of the ruling reptiles, became aerial specialists.

The appearance and dominance of flowering plants in the Cenozoic Era created new niches for insects, as well as for birds and mammals. Changes in animal species diversity during the late Cretaceous and early Cenozoic were also promoted by a dramatic shift in Earth’s geography, as continental plates slid over the crust into their current positions, leaving some animal groups isolated on islands and continents, or separated by mountain ranges or inland seas from other competitors. Early in the Cenozoic, new ecosystems appeared, with the evolution of grasses and coral reefs. Late in the Cenozoic, further extinctions followed by speciation occurred during ice ages that covered high latitudes with ice and then retreated, leaving new open spaces for colonization.

Watch the following video to learn more about the mass extinctions.

Natural history museums contain the fossil casts of extinct animals and information about how these animals evolved, lived, and died. Paleontogists are scientists who study prehistoric life. They use fossils to observe and explain how life evolved on Earth and how species interacted with each other and with the environment. A paleontologist needs to be knowledgeable in biology, ecology, chemistry, geology, and many other scientific disciplines.

A paleontologist’s work may involve field studies: searching for and studying fossils. In addition to digging for and finding fossils, paleontologists also prepare fossils for further study and analysis. Although dinosaurs are probably the first animals that come to mind when thinking about paleontology, paleontologists study everything from plant life, fungi, and fish to sea animals and birds.