Biology » Introduction to Animal Diversity » Features of the Animal Kingdom

Most animals are diploid organisms, meaning that their body (somatic) cells are diploid and haploid reproductive (gamete) cells are produced through meiosis. Some exceptions exist: For example, in bees, wasps, and ants, the male is haploid because it develops from unfertilized eggs. Most animals undergo sexual reproduction: This fact distinguishes animals from fungi, protists, and bacteria, where asexual reproduction is common or exclusive. However, a few groups, such as cnidarians, flatworm, and roundworms, undergo asexual reproduction, although nearly all of those animals also have a sexual phase to their life cycle.

During sexual reproduction, the haploid gametes of the male and female individuals of a species combine in a process called fertilization. Typically, the small, motile male sperm fertilizes the much larger, sessile female egg. This process produces a diploid fertilized egg called a zygote.

After fertilization, a series of developmental stages occur during which primary germ layers are established and reorganize to form an embryo. During this process, animal tissues begin to specialize and organize into organs and organ systems, determining their future morphology and physiology. Some animals, such as grasshoppers, undergo incomplete metamorphosis, in which the young resemble the adult. Other animals, such as some insects, undergo complete metamorphosis where individuals enter one or more larval stages that may in differ in structure and function from the adult (see the figure below). For the latter, the young and the adult may have different diets, limiting competition for food between them. Regardless of whether a species undergoes complete or incomplete metamorphosis, the series of developmental stages of the embryo remains largely the same for most members of the animal kingdom. 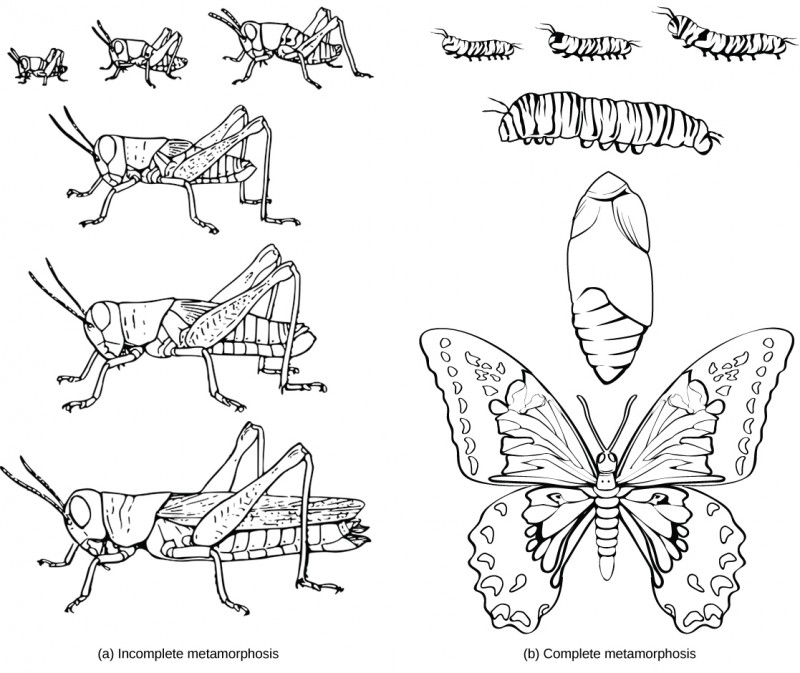 The process of animal development begins with the cleavage, or series of mitotic cell divisions, of the zygote (see the figure below). Three cell divisions transform the single-celled zygote into an eight-celled structure. After further cell division and rearrangement of existing cells, a 6–32-celled hollow structure called a blastula is formed. Next, the blastula undergoes further cell division and cellular rearrangement during a process called gastrulation. This leads to the formation of the next developmental stage, the gastrula, in which the future digestive cavity is formed. Different cell layers (called germ layers) are formed during gastrulation. These germ layers are programmed to develop into certain tissue types, organs, and organ systems during a process called organogenesis.

During embryonic development, the zygote undergoes a series of mitotic cell divisions, or cleavages, to form an eight-cell stage, then a hollow blastula. During a process called gastrulation, the blastula folds inward to form a cavity in the gastrula.

Watch the following video to see how human embryonic development (after the blastula and gastrula stages of development) reflects evolution.

The Role of Homeobox (Hox) Genes in Animal Development

Since the early 19th century, scientists have observed that many animals, from the very simple to the complex, shared similar embryonic morphology and development. Surprisingly, a human embryo and a frog embryo, at a certain stage of embryonic development, look remarkably alike. For a long time, scientists did not understand why so many animal species looked similar during embryonic development but were very different as adults. They wondered what dictated the developmental direction that a fly, mouse, frog, or human embryo would take. Near the end of the 20th century, a particular class of genes was discovered that had this very job.

These genes that determine animal structure are called “homeotic genes,” and they contain DNA sequences called homeoboxes. The animal genes containing homeobox sequences are specifically referred to as Hox genes. This family of genes is responsible for determining the general body plan, such as the number of body segments of an animal, the number and placement of appendages, and animal head-tail directionality. The first Hox genes to be sequenced were those from the fruit fly (Drosophila melanogaster). A single Hox mutation in the fruit fly can result in an extra pair of wings or even appendages growing from the “wrong” body part.

While there are a great many genes that play roles in the morphological development of an animal, what makes Hox genes so powerful is that they serve as master control genes that can turn on or off large numbers of other genes. Hox genes do this by coding transcription factors that control the expression of numerous other genes. Hox genes are homologous in the animal kingdom, that is, the genetic sequences of Hox genes and their positions on chromosomes are remarkably similar across most animals because of their presence in a common ancestor, from worms to flies, mice, and humans (see the figure below). One of the contributions to increased animal body complexity is that Hox genes have undergone at least two duplication events during animal evolution, with the additional genes allowing for more complex body types to evolve. 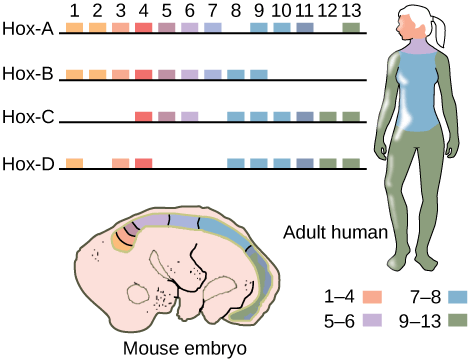 Hox genes are highly conserved genes encoding transcription factors that determine the course of embryonic development in animals. In vertebrates, the genes have been duplicated into four clusters: Hox-A, Hox-B, Hox-C, and Hox-D. Genes within these clusters are expressed in certain body segments at certain stages of development. Shown here is the homology between Hox genes in mice and humans. Note how Hox gene expression, as indicated with orange, pink, blue and green shading, occurs in the same body segments in both the mouse and the human.

If a Hox 13 gene in a mouse was replaced with a Hox 1 gene, how might this alter animal development?

The animal might develop two heads and no tail.