OPEC’s objective is to co-ordinate and unify petroleum policies among Member Countries, in order to secure fair and stable prices for petroleum producers; an efficient, economic and regular supply of petroleum to consuming nations; and a fair return on capital to those investing in the industry. 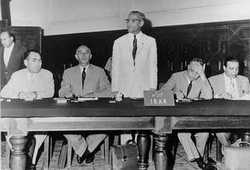 OPEC’s formation by five oil-producing developing countries in Baghdad in September 1960 occurred at a time of transition in the international economic and political landscape, with extensive decolonisation and the birth of many new independent states in the developing world. The international oil market was dominated by the “Seven Sisters” multinational companies and was largely separate from that of the former Soviet Union (FSU) and other centrally planned economies (CPEs). OPEC developed its collective vision, set up its objectives and established its Secretariat, first in Geneva and then, in 1965, in Vienna. It adopted a ‘Declaratory Statement of Petroleum Policy in Member Countries’ in 1968, which emphasised the inalienable right of all countries to exercise permanent sovereignty over their natural resources in the interest of their national development. Membership grew to ten by 1969. 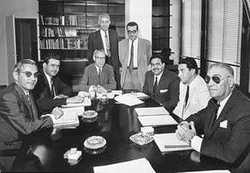 OPEC rose to international prominence during this decade, as its Member Countries took control of their domestic petroleum industries and acquired a major say in the pricing of crude oil on world markets. On two occasions, oil prices rose steeply in a volatile market, triggered by the Arab oil embargo in 1973 and the outbreak of the Iranian Revolution in 1979. OPEC broadened its mandate with the first Summit of Heads of State and Government in Algiers in 1975, which addressed the plight of the poorer nations and called for a new era of cooperation in international relations, in the interests of world economic development and stability. This led to the establishment of the OPEC Fund for International Development in 1976. Member Countries embarked on ambitious socio-economic development schemes. Membership grew to 13 by 1975. 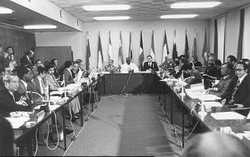 After reaching record levels early in the decade, prices began to weaken, before crashing in 1986, responding to a big oil glut and consumer shift away from this hydrocarbon. OPEC’s share of the smaller oil market fell heavily and its total petroleum revenue dropped below a third of earlier peaks, causing severe economic hardship for many Member Countries. Prices rallied in the final part of the decade, but to around half the levels of the early part, and OPEC’s share of newly growing world output began to recover. This was supported by OPEC introducing a group production ceiling divided among Member Countries and a Reference Basket for pricing, as well as significant progress with OPEC/non-OPEC dialogue and cooperation, seen as essential for market stability and reasonable prices. Environmental issues emerged on the international energy agenda. 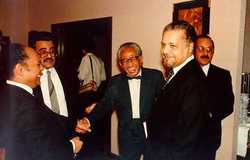 Prices moved less dramatically than in the 1970s and 1980s, and timely OPEC action reduced the market impact of Middle East hostilities in 1990–91. But excessive volatility and general price weakness dominated the decade, and the South-East Asian economic downturn and mild Northern Hemisphere winter of 1998–99 saw prices back at 1986 levels. However, a solid recovery followed in a more integrated oil market, which was adjusting to the post-Soviet world, greater regionalism, globalisation, the communications revolution and other high-tech trends. Breakthroughs in producer-consumer dialogue matched continued advances in OPEC/non-OPEC relations. As the United Nations-sponsored climate change negotiations gathered momentum, after the Earth Summit of 1992, OPEC sought fairness, balance and realism in the treatment of oil supply. One country left OPEC, while another suspended its Membership. 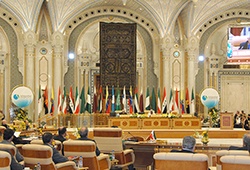 An innovative OPEC oil price band mechanism helped strengthen and stabilise crude prices in the early years of the decade. But a combination of market forces, speculation and other factors transformed the situation in 2004, pushing up prices and increasing volatility in a well-supplied crude market. Oil was used increasingly as an asset class. Prices soared to record levels in mid-2008, before collapsing in the emerging global financial turmoil and economic recession. OPEC became prominent in supporting the oil sector, as part of global efforts to address the economic crisis. OPEC’s second and third summits in Caracas and Riyadh in 2000 and 2007 established stable energy markets, sustainable development and the environment as three guiding themes, and it adopted a comprehensive long-term strategy in 2005. One country joined OPEC, another reactivated its Membership and a third suspended it. 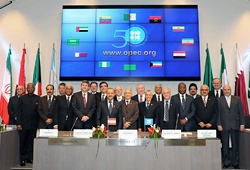 The global economy represented the main risk to the oil market early in the decade, as global macroeconomic uncertainties and heightened risks surrounding the international financial system weighed on economies. Escalating social unrest in many parts of the world affected both supply and demand throughout the first half of the decade, although the market remained relatively balanced. Prices were stable between 2011 and mid-2014, before a combination of speculation and oversupply caused them to fall in 2014. Trade patterns continued to shift, with demand growing further in Asian countries and generally shrinking in the OECD. The world’s focus on multilateral environmental matters began to sharpen, with expectations for a new UN-led climate change agreement. OPEC continued to seek stability in the market, and looked to further enhance its dialogue and cooperation with consumers, and non-OPEC producers.

"Brief History" by Organization of the Petroleum Exporting Countries (OPEC)