NK cells identify intracellular infections, especially from viruses, by the altered expression of major histocompatibility class (MHC) I molecules on the surface of infected cells. MHC I molecules are proteins on the surfaces of all nucleated cells, thus they are scarce on red blood cells and platelets which are non-nucleated. The function of MHC I molecules is to display fragments of proteins from the infectious agents within the cell to T-cells; healthy cells will be ignored, while “non-self” or foreign proteins will be attacked by the immune system. MHC II molecules are found mainly on cells containing antigens (“non-self proteins”) and on lymphocytes. MHC II molecules interact with helper T-cells to trigger the appropriate immune response, which may include the inflammatory response. 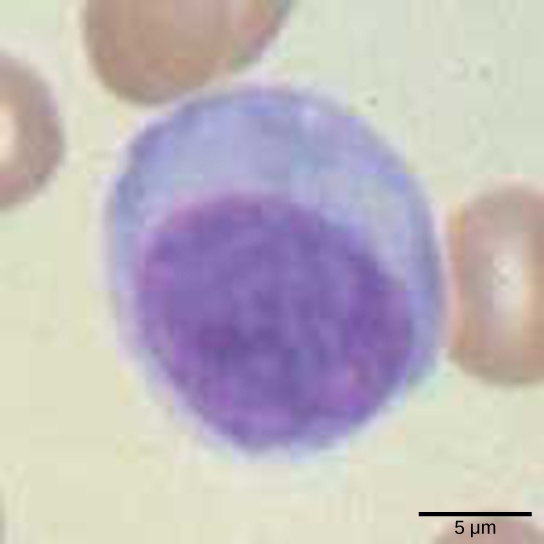 Lymphocytes, such as NK cells, are characterized by their large nuclei that actively absorb Wright stain and therefore appear dark colored under a microscope.

An infected cell (or a tumor cell) is usually incapable of synthesizing and displaying MHC I molecules appropriately. The metabolic resources of cells infected by some viruses produce proteins that interfere with MHC I processing and/or trafficking to the cell surface. The reduced MHC I on host cells varies from virus to virus and results from active inhibitors being produced by the viruses. This process can deplete host MHC I molecules on the cell surface, which NK cells detect as “unhealthy” or “abnormal” while searching for cellular MHC I molecules. Similarly, the dramatically altered gene expression of tumor cells leads to expression of extremely deformed or absent MHC I molecules that also signal “unhealthy” or “abnormal.”

NK cells are always active; an interaction with normal, intact MHC I molecules on a healthy cell disables the killing sequence, and the NK cell moves on. After the NK cell detects an infected or tumor cell, its cytoplasm secretes granules comprised of perforin, a destructive protein that creates a pore in the target cell. Granzymes are released along with the perforin in the immunological synapse. A granzyme is a protease that digests cellular proteins and induces the target cell to undergo programmed cell death, or apoptosis. Phagocytic cells then digest the cell debris left behind. NK cells are constantly patrolling the body and are an effective mechanism for controlling potential infections and preventing cancer progression.