An antigen is a foreign or “non-self” macromolecule that reacts with cells of the immune system. Not all antigens will provoke a response. For instance, individuals produce innumerable “self” antigens and are constantly exposed to harmless foreign antigens, such as food proteins, pollen, or dust components. The suppression of immune responses to harmless macromolecules is highly regulated and typically prevents processes that could be damaging to the host, known as tolerance.

The innate immune system contains cells that detect potentially harmful antigens, and then inform the adaptive immune response about the presence of these antigens. An antigen-presenting cell (APC) is an immune cell that detects, engulfs, and informs the adaptive immune response about an infection. When a pathogen is detected, these APCs will phagocytose the pathogen and digest it to form many different fragments of the antigen. Antigen fragments will then be transported to the surface of the APC, where they will serve as an indicator to other immune cells. Dendritic cells are immune cells that process antigen material; they are present in the skin (Langerhans cells) and the lining of the nose, lungs, stomach, and intestines. Sometimes a dendritic cell presents on the surface of other cells to induce an immune response, thus functioning as an antigen-presenting cell. Macrophages also function as APCs. Before activation and differentiation, B cells can also function as APCs.

After phagocytosis by APCs, the phagocytic vesicle fuses with an intracellular lysosome forming phagolysosome. Within the phagolysosome, the components are broken down into fragments; the fragments are then loaded onto MHC class I or MHC class II molecules and are transported to the cell surface for antigen presentation, as illustrated in the figure below. Note that T lymphocytes cannot properly respond to the antigen unless it is processed and embedded in an MHC II molecule. APCs express MHC on their surfaces, and when combined with a foreign antigen, these complexes signal a “non-self” invader. Once the fragment of antigen is embedded in the MHC II molecule, the immune cell can respond. Helper T- cells are one of the main lymphocytes that respond to antigen-presenting cells. Recall that all other nucleated cells of the body expressed MHC I molecules, which signal “healthy” or “normal.” 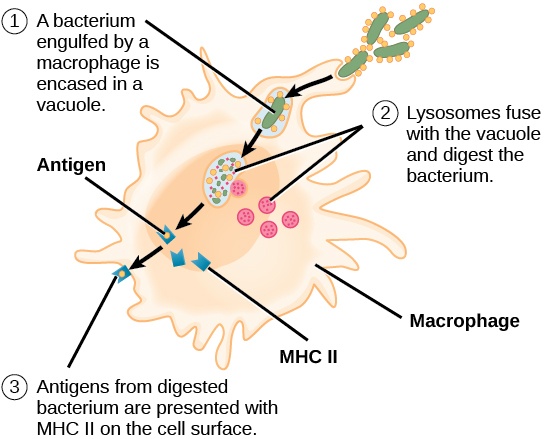 An APC, such as a macrophage, engulfs and digests a foreign bacterium. An antigen from the bacterium is presented on the cell surface in conjunction with an MHC II molecule Lymphocytes of the adaptive immune response interact with antigen-embedded MHC II molecules to mature into functional immune cells.

This animation from Rockefeller University shows how dendritic cells act as sentinels in the body’s immune system.