Differentiated plasma cells are crucial players in the humoral response, and the antibodies they secrete are particularly significant against extracellular pathogens and toxins. Antibodies circulate freely and act independently of plasma cells. Antibodies can be transferred from one individual to another to temporarily protect against infectious disease. For instance, a person who has recently produced a successful immune response against a particular disease agent can donate blood to a nonimmune recipient and confer temporary immunity through antibodies in the donor’s blood serum. This phenomenon is called passive immunity; it also occurs naturally during breastfeeding, which makes breastfed infants highly resistant to infections during the first few months of life.

Antibodies coat extracellular pathogens and neutralize them, as illustrated in the figure below, by blocking key sites on the pathogen that enhance their infectivity (such as receptors that “dock” pathogens on host cells). Antibody neutralization can prevent pathogens from entering and infecting host cells, as opposed to the CTL-mediated approach of killing cells that are already infected to prevent progression of an established infection. The neutralized antibody-coated pathogens can then be filtered by the spleen and eliminated in urine or feces. 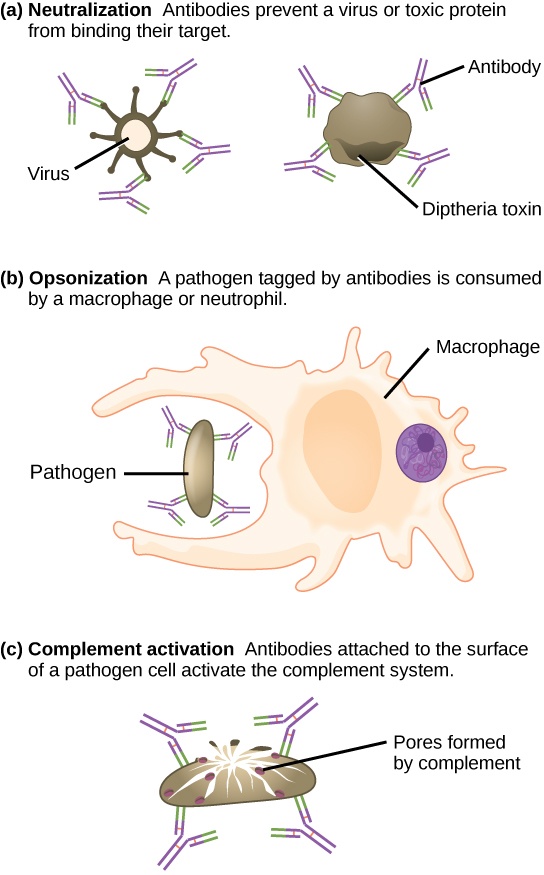 Antibodies may inhibit infection by (a) preventing the antigen from binding its target, (b) tagging a pathogen for destruction by macrophages or neutrophils, or (c) activating the complement cascade.

Antibodies also mark pathogens for destruction by phagocytic cells, such as macrophages or neutrophils, because phagocytic cells are highly attracted to macromolecules complexed with antibodies. Phagocytic enhancement by antibodies is called opsonization. In a process called complement fixation, IgM and IgG in serum bind to antigens and provide docking sites onto which sequential complement proteins can bind. The combination of antibodies and complement enhances opsonization even further and promotes rapid clearing of pathogens.

Not all antibodies bind with the same strength, specificity, and stability. In fact, antibodies exhibit different affinities (attraction) depending on the molecular complementarity between antigen and antibody molecules, as illustrated in the figure below. An antibody with a higher affinity for a particular antigen would bind more strongly and stably, and thus would be expected to present a more challenging defense against the pathogen corresponding to the specific antigen. 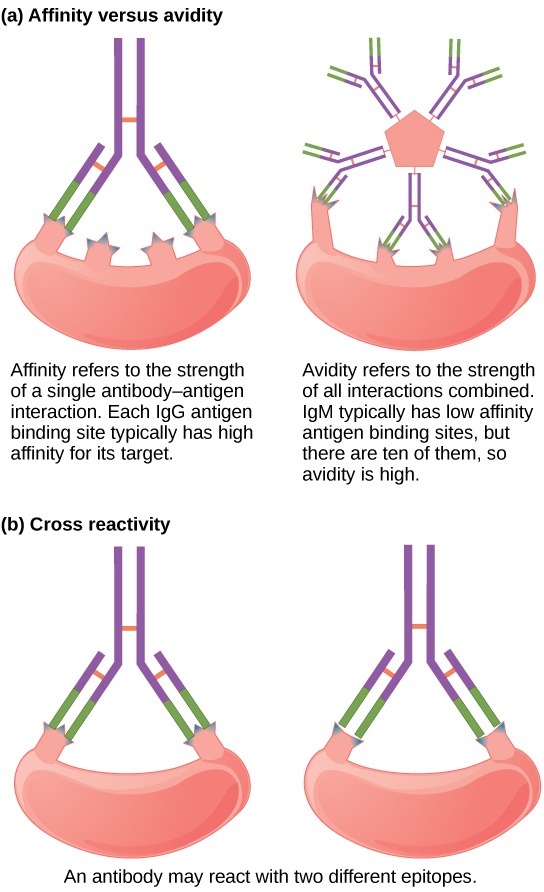 The term avidity describes binding by antibody classes that are secreted as joined, multivalent structures (such as IgM and IgA). Although avidity measures the strength of binding, just as affinity does, the avidity is not simply the sum of the affinities of the antibodies in a multimeric structure. The avidity depends on the number of identical binding sites on the antigen being detected, as well as other physical and chemical factors. Typically, multimeric antibodies, such as pentameric IgM, are classified as having lower affinity than monomeric antibodies, but high avidity. Essentially, the fact that multimeric antibodies can bind many antigens simultaneously balances their slightly lower binding strength for each antibody/antigen interaction.

Antibodies secreted after binding to one epitope on an antigen may exhibit cross reactivity for the same or similar epitopes on different antigens. Because an epitope corresponds to such a small region (the surface area of about four to six amino acids), it is possible for different macromolecules to exhibit the same molecular identities and orientations over short regions. Cross reactivity describes when an antibody binds not to the antigen that elicited its synthesis and secretion, but to a different antigen.

Cross reactivity can be beneficial if an individual develops immunity to several related pathogens despite having only been exposed to or vaccinated against one of them. For instance, antibody cross reactivity may occur against the similar surface structures of various Gram-negative bacteria. Conversely, antibodies raised against pathogenic molecular components that resemble self molecules may incorrectly mark host cells for destruction and cause autoimmune damage. Patients who develop systemic lupus erythematosus (SLE) commonly exhibit antibodies that react with their own DNA. These antibodies may have been initially raised against the nucleic acid of microorganisms but later cross-reacted with self-antigens. This phenomenon is also called molecular mimicry.

Antibodies of the Mucosal Immune System

Antibodies synthesized by the mucosal immune system include IgA and IgM. Activated B cells differentiate into mucosal plasma cells that synthesize and secrete dimeric IgA, and to a lesser extent, pentameric IgM. Secreted IgA is abundant in tears, saliva, breast milk, and in secretions of the gastrointestinal and respiratory tracts. Antibody secretion results in a local humoral response at epithelial surfaces and prevents infection of the mucosa by binding and neutralizing pathogens.