The skin is the major organ of the integumentary system, which also includes the nails and hair. In fact, the skin is the body’s largest organ, and a remarkable one at that. Consider these skin facts. The average square inch (6.5 cm2) of skin has 20 blood vessels, 650 sweat glands, and more than a thousand nerve endings. It also has an incredible 60,000 pigment-producing cells. All of these structures are packed into a stack of cells that is just 2 mm thick, or about as thick as the cover of a book.

Although the skin is thin, it consists of two distinct layers, called the epidermis and the dermis. These layers are shown in the figure below. 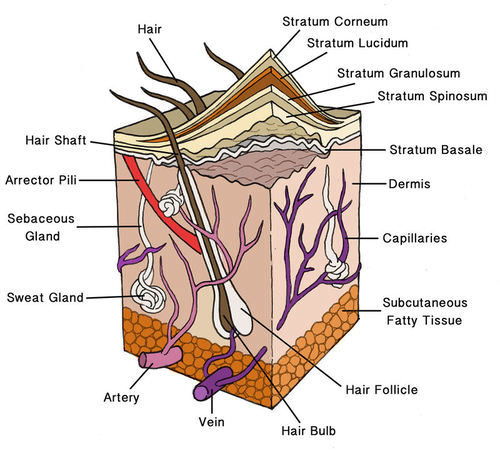 Layers of Human Skin. The outer layer of the skin is the epidermis, and the inner layer is the dermis. Most skin structures originate in the dermis.

The epidermis is the outer layer of skin, consisting of epithelial cells and little else (see the figure below). For example, there are no nerve endings or blood vessels in the epidermis. The innermost cells of the epidermis are continuously dividing through mitosis to form new cells. The newly formed cells move up through the epidermis toward the skin surface, while producing a tough, fibrous protein called keratin. The cells become filled with keratin and die by the time they reach the surface, where they form a protective, waterproof layer called the stratum corneum. The dead cells are gradually shed from the surface of the skin and replaced by other cells.

Cell Layers of the Epidermis. The epidermis consists mainly of epithelial cells.

The epidermis also contains melanocytes, which are cells that produce melanin. Melanin is the brownish pigment that gives skin much of its color. Everyone has about the same number of melanocytes, but the melanocytes of people with darker skin produce more melanin. The amount of melanin produced is determined by heredity and exposure to UV light, which increases melanin output. Exposure to UV light also stimulates the skin to produce vitamin D. Because melanin blocks UV light from penetrating the skin, people with darker skin may be at greater risk of vitamin D deficiency.

The dermis is the lower layer of the skin, located directly beneath the epidermis (see the figure below). It is made of tough connective tissue and attached to the epidermis by collagen fibers. The dermis contains blood vessels and nerve endings. Because of the nerve endings, skin can feel touch, pressure, heat, cold, and pain. The dermis also contains hair follicles and two types of glands. 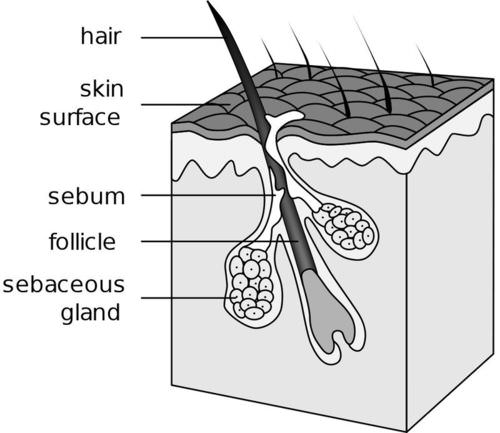 Structures of the Dermis. The dermis contains most of the structures found in skin.

Functions of the Skin

The skin has multiple roles in the body. Many of these roles are related to homeostasis. The skin’s main functions are preventing water loss from the body and serving as a barrier to the entry of microorganisms. In addition, melanin in the skin blocks UV light and protects deeper layers from its damaging effects.

In part because it is exposed to the environment, the skin is prone to injury and other problems. Two common problems of the skin are acne and skin cancer (see the figure below).

ABCDs of Skin Cancer. A brown spot on the skin is likely to be a harmless mole, but it could be a sign of skin cancer. Unlike moles, skin cancers are generally asymmetrical, have irregular borders, may be very dark in color, and may have a relatively great diameter.