A close-up view of a spider web? Some sort of exotic bacteria? What do you think this is?

This is actually a nerve cell, the cell of the nervous system. This cell sends electrical “sparks” that transmit signals throughout your body.

A small child darts in front of your bike as you race down the street. You see the child and immediately react. You put on the brakes, steer away from the child, and yell out a warning, all in just a split second. How do you respond so quickly? Such rapid responses are controlled by your nervous system. The nervous system is a complex network of nervous tissue that carries electrical messages throughout the body. It includes the brain and spinal cord, the central nervous system, and nerves that run throughout the body, the peripheral nervous system (see the figure below). To understand how nervous messages can travel so quickly, you need to know more about nerve cells. 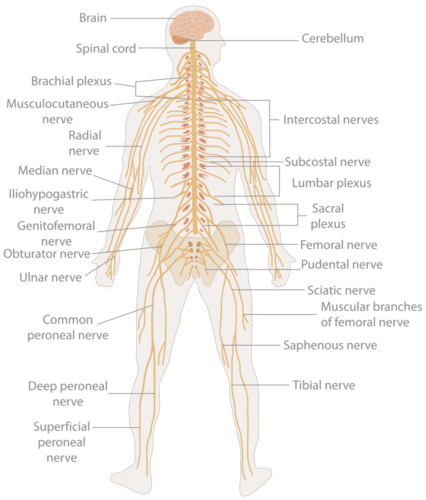 Although the nervous system is very complex, nervous tissue consists of just two basic types of nerve cells: neurons and glial cells. Neurons are the structural and functional units of the nervous system. They transmit electrical signals, called nerve impulses. Glial cells provide support for neurons. For example, they provide neurons with nutrients and other materials.

As shown in the figure below, a neuron consists of three basic parts: the cell body, dendrites, and axon. 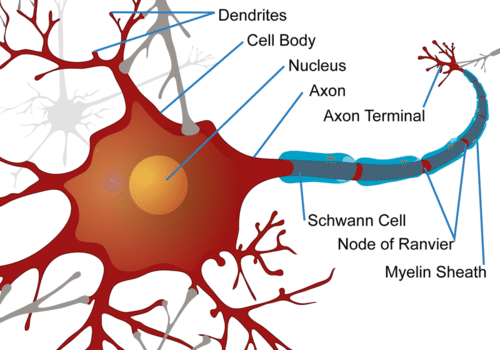 The structure of a neuron allows it to rapidly transmit nerve impulses to other cells.

The axon of many neurons has an outer layer called a myelin sheath (see the figure above). Myelin is a lipid produced by a type of a glial cell known as a Schwann cell. The myelin sheath acts like a layer of insulation, similar to the plastic that encases an electrical cord. Regularly spaced nodes, or gaps, in the myelin sheath allow nerve impulses to skip along the axon very rapidly.

Neurons are classified based on the direction in which they carry nerve impulses. 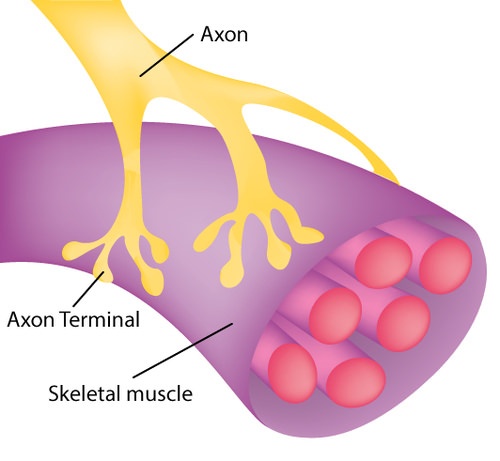 This axon is part of a motor neuron. It transmits nerve impulses to a skeletal muscle, causing the muscle to contract.