How does a nervous system signal move from one cell to the next?

It literally jumps by way of a chemical transmitter. Notice the two cells are not connected, but separated by a small gap. The synapse. The space between a neuron and the next cell.

When a neuron is not actively transmitting a nerve impulse, it is in a resting state, ready to transmit a nerve impulse. During the resting state, the sodium-potassium pump maintains a difference in charge across the cell membrane (see the figure below). It uses energy in ATP to pump positive sodium ions (Na+) out of the cell and potassium ions (K+) into the cell. As a result, the inside of the neuron is negatively charged compared to the extracellular fluid surrounding the neuron. This is due to many more positively charged ions outside the cell compared to inside the cell. This difference in electrical charge is called the resting potential.

The sodium-potassium pump maintains the resting potential of a neuron.

A nerve impulse is a sudden reversal of the electrical charge across the membrane of a resting neuron. The reversal of charge is called an action potential. It begins when the neuron receives a chemical signal from another cell. The signal causes gates in sodium ion channels to open, allowing positive sodium ions to flow back into the cell. As a result, the inside of the cell becomes positively charged compared to the outside of the cell. This reversal of charge ripples down the axon very rapidly as an electric current (see the figure below). 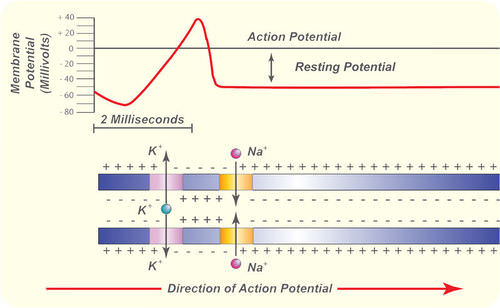 An action potential speeds along an axon in milliseconds.

In neurons with myelin sheaths, ions flow across the membrane only at the nodes between sections of myelin. As a result, the action potential jumps along the axon membrane from node to node, rather than spreading smoothly along the entire membrane. This increases the speed at which it travels. 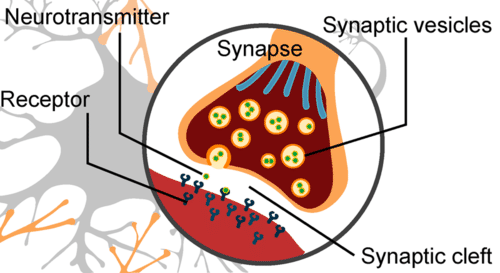 At a synapse, neurotransmitters are released by the axon terminal. They bind with receptors on the other cell.