What happens when your tonsils cause more problems than they solve?

Almost all of us have had a sore throat at some time. Maybe you had your tonsils out when you were younger? Why? Your tonsils are two lumps of tissue that work as germ fighters for your body. But sometimes germs like to hang out there, where they cause infections. In other words, your tonsils can cause more problems than they solve. So, you have them taken out.

Structures of the Lymphatic System 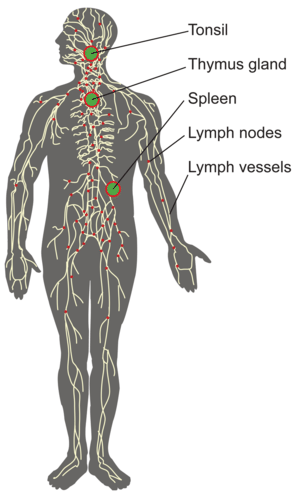 The lymphatic system consists of organs, vessels, and lymph.

Lymphatic vessels make up a body-wide circulatory system. The fluid they circulate is lymph. Lymph is a fluid that leaks out of capillaries into spaces between cells. As the lymph accumulates between cells, it diffuses into tiny lymphatic vessels. The lymph then moves through the lymphatic system from smaller to larger vessels. It finally drains back into the bloodstream in the chest. As lymph passes through the lymphatic vessels, pathogens are filtered out at small structures called lymph nodes (see the figure above). The filtered pathogens are destroyed by lymphocytes.

The human body has as many as two trillion lymphocytes, and lymphocytes make up about 25% of all leukocytes. The majority of lymphocytes are found in the lymphatic system, where they are most likely to encounter pathogens. The rest are found in the blood. There are two major types of lymphocytes, called B cells and T cells. These cells get their names from the organs in which they mature. B cells mature in bone marrow, and T cells mature in the thymus. Both B and T cells recognize and respond to particular pathogens.

How do B and T cells recognize specific antigens? They have receptor molecules on their surface that bind only with particular antigens.

As shown in the figure below, the fit between an antigen and a matching receptor molecule is like a key in a lock. 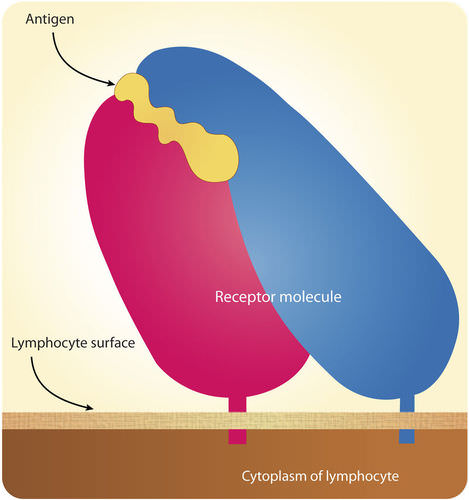 An antigen fits the matching receptor molecule like a key in a lock.