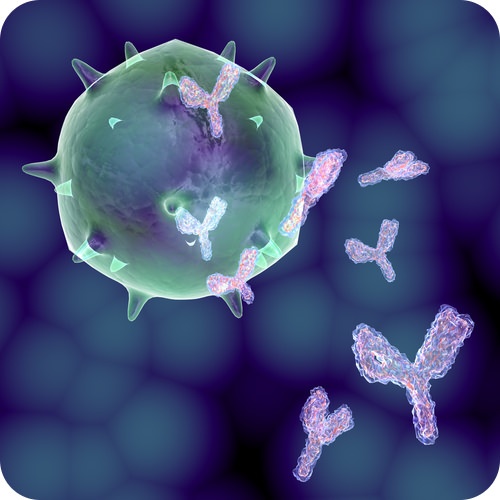 What are those Y-shaped things floating around the cell?

They are antibodies, which are large proteins. And they signal specific antigens for destruction. It does help that the antigens are usually attached to pathogens.

There are actually two types of immune responses: humoral and cell-mediated. The humoral immune response involves mainly B cells and takes place in blood and lymph.

B cells must be activated by an antigen before they can fight pathogens. This happens in the sequence of events shown in the figure below. First, a B cell encounters its matching antigen and engulfs it. The B cell then displays fragments of the antigen on its surface. This attracts a helper T cell. The helper T cell binds to the B cell at the antigen site and releases cytokines that “tell” or signal the B cell to develop into a plasma cell. 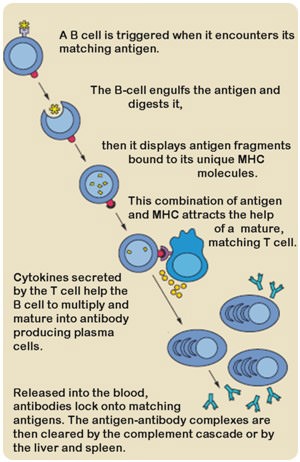 Activation of a B cell must occur before it can respond to pathogens. What role do T cells play in the activation process?

Plasma cells are activated B cells that secrete antibodies. Antibodies are large, Y-shaped proteins that recognize and bind to antigens. Plasma cells are like antibody factories, producing many copies of a single type of antibody. The antibodies travel throughout the body in blood and lymph. Each antibody binds to just one kind of antigen. When it does, it forms an antigen-antibody complex (see the figure below). The complex flags the antigen-bearing cell for destruction by phagocytosis. 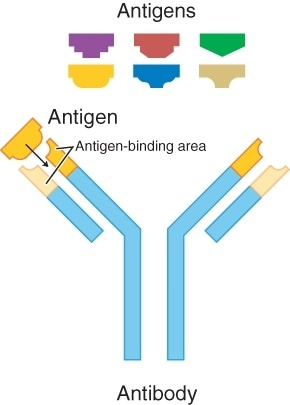 An antibody matches only one type of antigen.

Most plasma cells live for just a few days, but some of them live much longer. They may even survive for the lifetime of the individual. Long-living plasma cells are called memory cells. They retain a “memory” of a specific pathogen long after an infection is over. They help launch a rapid response against the pathogen if it invades the body again in the future.