Steroid hormones. How do they work?

As hormones, they are the messengers of the endocrine system. Obviously they must change something in the cell.

Hormones are the messenger molecules of the endocrine system. Endocrine hormones travel throughout the body in the blood. However, each hormone affects only certain cells, called target cells. A target cell is the type of cell on which a hormone has an effect. A target cell is affected by a particular hormone because it has receptor proteins that are specific to that hormone. A hormone travels through the bloodstream until it finds a target cell with a matching receptor it can bind to. When the hormone binds to a receptor, it causes a change within the cell. Exactly how this works depends on whether the hormone is a steroid hormone or a non-steroid hormone.

Steroid hormones are made of lipids, such as phospholipids and cholesterol. They are fat soluble, so they can diffuse across the plasma membrane of target cells and bind with receptors in the cytoplasm of the cell (see the figure below). The steroid hormone and receptor form a complex that moves into the nucleus and influences the expression of genes, essentially acting as a transcription factor. Examples of steroid hormones include cortisol and sex hormones.

A steroid hormone crosses the plasma membrane of a target cell and binds with a receptor inside the cell. 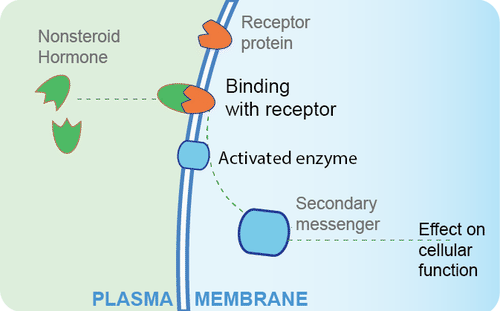 A non-steroid hormone binds with a receptor on the plasma membrane of a target cell. Then, a secondary messenger affects cell processes.