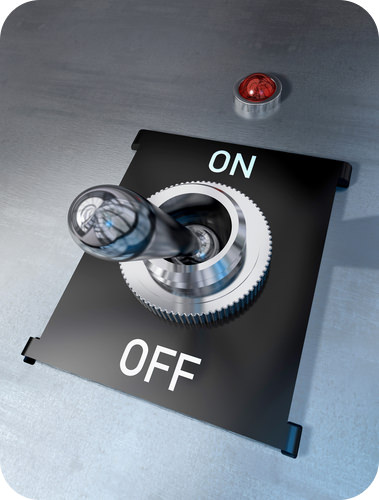 Hormones alter conditions inside the cell, usually in response to a stimulus. That means they are activated at specific times. So they must be turned on and then turned back off. What turns these hormones and their responses on or off?

Negative feedback occurs when a product feeds back to decrease its own production. This type of feedback brings things back to normal whenever they start to become too extreme. The thyroid gland is a good example of this type of regulation. It is controlled by the negative feedback loop shown in the figure below. 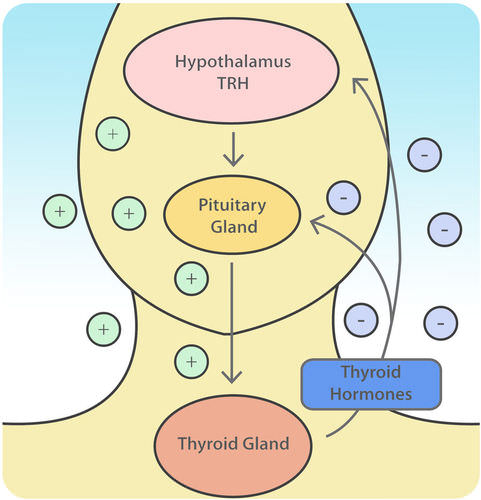 The thyroid gland is regulated by a negative feedback loop. The loop includes the hypothalamus and pituitary gland in addition to the thyroid.

Here’s how thyroid regulation works. The hypothalamus secretes thyrotropin-releasing hormone, or TRH. TRH stimulates the pituitary gland to produce thyroid-stimulating hormone, or TSH. TSH, in turn, stimulates the thyroid gland to secrete its hormones. When the level of thyroid hormones is high enough, the hormones feedback to stop the hypothalamus from secreting TRH and the pituitary from secreting TSH. Without the stimulation of TSH, the thyroid gland stops secreting its hormones. Soon, the level of thyroid hormone starts to fall too low. What do you think happens next?

Positive feedback occurs when a product feeds back to increase its own production. This causes conditions to become increasingly extreme. An example of positive feedback is milk production by a mother for her baby. As the baby suckles, nerve messages from the nipple cause the pituitary gland to secrete prolactin. Prolactin, in turn, stimulates the mammary glands to produce milk, so the baby suckles more. This causes more prolactin to be secreted and more milk to be produced. This example is one of the few positive feedback mechanisms in the human body. What do you think would happen if milk production by the mammary glands was controlled by negative feedback instead?