What happens if stability is disrupted?

Remove one stone and the whole arch collapses. The same is true for the human body. All the systems work together to maintain stability or homeostasis. Disrupt one system, and the whole body may be affected.

All of the organs and organ systems of the human body work together like a well-oiled machine. This is because they are closely regulated by the nervous and endocrine systems. The nervous system controls virtually all body activities, and the endocrine system secretes hormones that regulate these activities. Functioning together, the organ systems supply body cells with all the substances they need and eliminate their wastes. They also keep temperature, pH, and other conditions at just the right levels to support life processes.

So how does your body maintain homeostasis? The regulation of your internal environment is done primarily through negative feedback. Negative feedback is a response to a stimulus that keeps a variable close to a set value (the figure below). Essentially, it “shuts off” or “turns on” a system when it varies from a set value.

Another example of negative feedback has to do with blood glucose levels. When glucose (sugar) levels in the blood are too high, the pancreas secretes insulin to stimulate the absorption of glucose and the conversion of glucose into glycogen, which is stored in the liver. As blood glucose levels decrease, less insulin is produced. When glucose levels are too low, another hormone called glucagon is produced, which causes the liver to convert glycogen back to glucose. 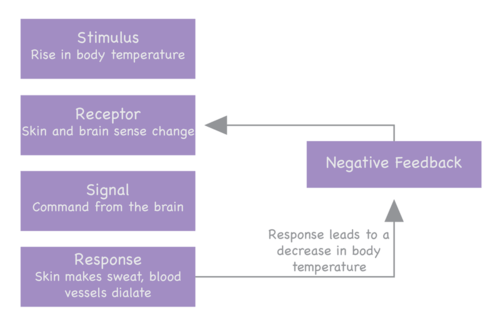 Feedback Regulation. If a raise in body temperature (stimulus) is detected (receptor), a signal will cause the brain to maintain homeostasis (response). Once the body temperature returns to normal, negative feedback will cause the response to end. This sequence of stimulus-receptor-signal-response is used throughout the body to maintain homeostasis.

Many homeostatic mechanisms such as these work continuously to maintain stable conditions in the human body. Sometimes, however, the mechanisms fail. When they do, cells may not get everything they need, or toxic wastes may accumulate in the body. If homeostasis is not restored, the imbalance may lead to disease or even death.

Science : Diary of A Snakebite Death

What does it feel like to be bitten by a venomous snake? In this video by Science Friday, learn about how Dr. Karl P. Schmidt wrote about the effects of snake bite venom while he was dying.