Think producing millions of sperm each day is complicated? 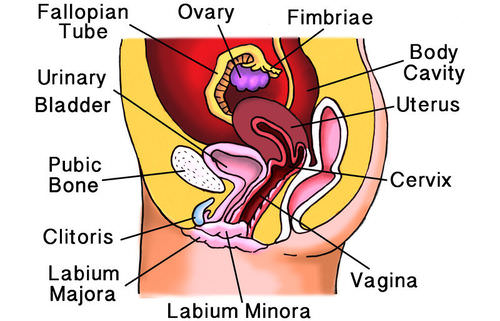 The external female reproductive structures are referred to collectively as the vulva. They include the labia (singular, labium), which are the “lips” of the vulva. The labia protect the vagina and urethra, both of which have openings in the vulva.

The vagina is a tube-like structure about 9 centimeters (3.5 inches) long. It begins at the vulva and extends upward to the uterus. It has muscular walls lined with mucous membranes. The vagina has two major reproductive functions. It receives sperm during sexual intercourse, and it provides a passageway for a baby to leave the mother’s body during birth.

The uterus is a muscular organ shaped like an upside-down pear. It has a thick lining of tissues called the endometrium. The lower, narrower end of the uterus is known as the cervix. The uterus is where a fetus grows and develops until birth. During pregnancy, the uterus can expand greatly to make room for the baby as it grows. During birth, contractions of the muscular walls of the uterus push the baby through the cervix and out of the body.

The two ovaries are small, egg-shaped organs that lie on either side of the uterus. They produce eggs and secrete estrogen. Each egg is located inside a structure called a follicle. Cells in the follicle protect the egg and help it mature.

Extending from the upper corners of the uterus are the two fallopian tubes. Each tube reaches (but is not attached to) one of the ovaries. The ovary end of the tube has a fringelike structure that moves in waves. The motion sweeps eggs from the ovary into the tube.

The breasts are not directly involved in reproduction, but they nourish a baby after birth. Each breast contains mammary glands, which secrete milk. The milk drains into ducts leading to the nipple. A suckling baby squeezes the milk out of the ducts and through the nipple.