Do cells really attack other cells?

They sure do. Depicted here is a group of T cells attacking a cancer cell. When they can, the T cells search out and destroy “bad” cells.

All three types of T cells must be activated by an antigen before they can fight an infection or cancer. T cell activation is illustrated in the figure below. It begins when a B cell or nonspecific leukocyte engulfs a virus and displays its antigens. When the T cell encounters the matching antigen on a leukocyte, it becomes activated. What happens next depends on which type of T cell it is. 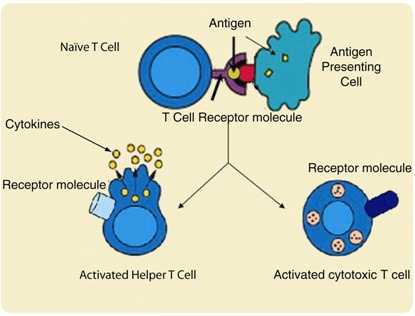 T cell activation requires another leukocyte to engulf a virus and display its antigen.

Helper T cells are like the “managers” of the immune response. They secrete cytokines, which activate or control the activities of other lymphocytes. Most helper T cells die out once a pathogen has been cleared from the body, but a few remain as memory cells. These memory cells are ready to produce large numbers of antigen-specific helper T cells like themselves if they are exposed to the same antigen in the future.

Cytotoxic T cells destroy virus-infected cells and some cancer cells. Once activated, a cytotoxic T cell divides rapidly and produces an “army” of cells identical to itself. These cells travel throughout the body “searching” for more cells to destroy. the figure below shows how a cytotoxic T cell destroys a body cell infected with viruses. This T cell releases toxins that form pores in the membrane of the infected cell. This causes the cell to burst, destroying both the cell and the viruses inside it. 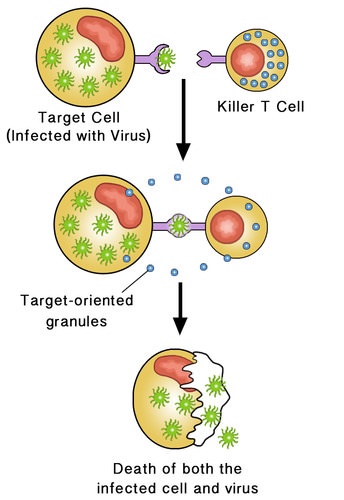 A cytotoxic T cell releases toxins that destroy an infected body cell and the viruses it contains.

After an infection has been brought under control, most cytotoxic T cells die off. However, a few remain as memory cells. If the same pathogen enters the body again, the memory cells mount a rapid immune response. They quickly produce many copies of cytotoxic T cells specific to the antigen of that pathogen.

Regulatory T cells are responsible for ending the cell-mediated immune response after an infection has been curbed. They also suppress T cells that mistakenly react against self antigens. What might happen if these T cells were not suppressed?