Grapes. Why? What do these have in common with a breath of air?

Below are the parts of the lungs where oxygen moves from the lungs into the blood. If the alveoli below were purple, they could resemble a bunch of grapes. Of course, as the alveoli are in the lungs, they must be very small to provide enough area for the exchange of gases. In fact, there are about 300 million alveoli in the adult lung.

Journey of a Breath of Air

Take in a big breath of air through your nose. As you inhale, you may feel the air pass down your throat and notice your chest expand. Now exhale and observe the opposite events occurring. Inhaling and exhaling may seem like simple actions, but they are just part of the complex process of respiration, which includes these four steps:

Respiration begins with ventilation. This is the process of moving air in and out of the lungs. The lungs are the organs in which gas exchange takes place between blood and air. 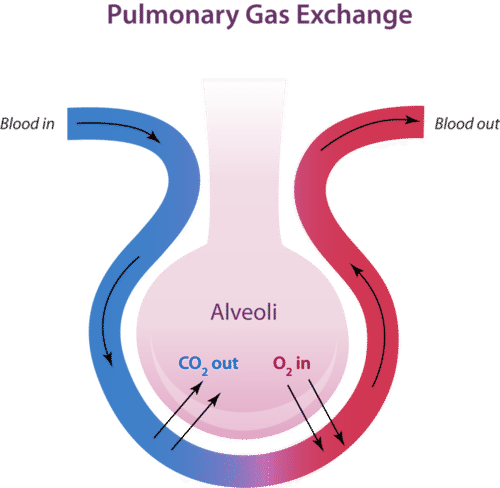 Alveoli are tiny sacs in the lungs where gas exchange takes place.

After the blood in the pulmonary capillaries becomes saturated with oxygen, it leaves the lungs and travels to the heart. The heart pumps the oxygen-rich blood into arteries, which carry it throughout the body. Eventually, the blood travels into capillaries that supply body tissues. These capillaries are called peripheral capillaries.

Back to the Lungs

The carbon dioxide from body cells travels in the blood from the peripheral capillaries to veins and then to the heart. The heart pumps the blood to the lungs, where the carbon dioxide diffuses into the alveoli. Then, the carbon dioxide passes out of the body through the other structures of the respiratory system, bringing the process of respiration full circle.