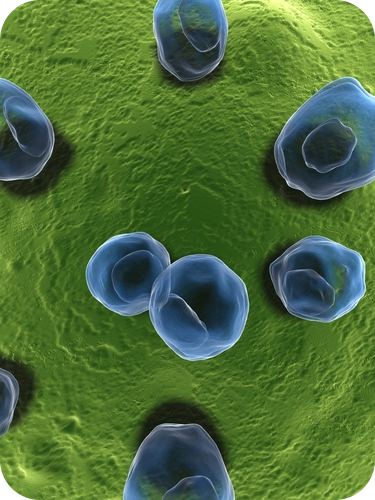 Single-celled organisms. Can they be dangerous?

These are chlamydia. Innocent-looking single-celled organisms. But these bacteria can lead to painful and devastating consequences.

Many STIs are caused by bacteria. Some of the most common bacterial STIs are chlamydia, gonorrhea, and syphilis. Bacterial STIs can be cured with antibiotics.

Chlamydia is the most common STI in the United States. As shown in the graph in the figure below, females are much more likely than males to develop chlamydia. Like most STIs, rates of chlamydia are highest in teens and young adults. 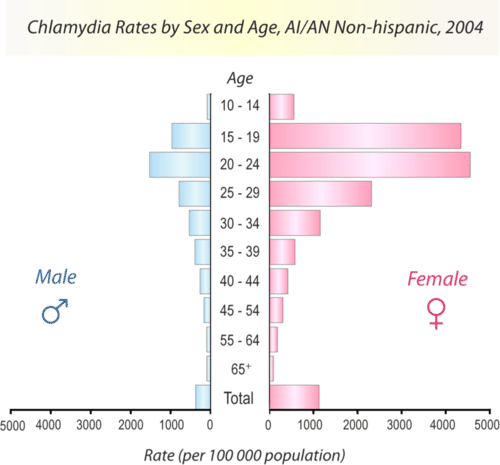 This graph shows the number of cases of chlamydia per 100,000 people in the U.S. in 2004. Which age group had the highest rates? How much higher were the rates for females aged 15–19 than for males in the same age group?

Symptoms of chlamydia may include a burning sensation during urination and a discharge from the vagina or penis. Chlamydia can be cured with antibiotics, but often there are no symptoms, so people do not seek treatment. Untreated chlamydia can lead to more serious problems, such as pelvic inflammatory disease (PID). This is an infection of the uterus, fallopian tubes, and/or ovaries. It can scar a woman’s reproductive organs and make it difficult for her to become pregnant.

Gonorrhea is another common STI. Symptoms of gonorrhea may include painful urination and discharge from the vagina or penis. Gonorrhea usually can be cured with antibiotics, although the bacteria have developed resistance to many of the drugs. Gonorrhea infections may not cause symptoms, especially in females, so they often go untreated. Untreated gonorrhea can lead to PID in females. It can lead to inflammation of the reproductive organs in males as well.

Syphilis is less common than chlamydia or gonorrhea but more serious if untreated. Early symptoms of syphilis infection include a small sore on or near the genitals. The sore is painless and heals on its own, so it may go unnoticed. If treated early, most cases of syphilis can be cured with antibiotics. Untreated syphilis can cause serious damage to the heart, brain, and other organs. It may eventually lead to death.