RNA to proteins. How?

Translation is the second part of the central dogma of molecular biology: RNA â†’ Protein. It is the process in which the genetic code in mRNA is read, one codon at a time, to make a protein. the figure below shows how this happens. After mRNA leaves the nucleus, it moves to a ribosome, which consists of rRNA and proteins. The ribosome reads the sequence of codons in mRNA. Molecules of tRNA bring amino acids to the ribosome in the correct sequence.

Translation of the codons in mRNA to a chain of amino acids occurs at a ribosome. Notice the growing amino acid chain attached to the tRNAs and ribosome. Find the different types of RNA in the diagram. What are their roles in translation?

To understand the role of tRNA, you need to know more about its structure. Each tRNA molecule has an anticodon for the amino acid it carries. An anticodon is a sequence of 3 bases, and is complementary to the codon for an amino acid. For example, the amino acid lysine has the codon AAG, so the anticodon is UUC. Therefore, lysine would be carried by a tRNA molecule with the anticodon UUC. Wherever the codon AAG appears in mRNA, a UUC anticodon on a tRNA temporarily binds to the codon. While bound to the mRNA, the tRNA gives up its amino acid. Bonds form between adjacent amino acids as they are brought one by one to the ribosome, forming a polypeptide chain. The chain of amino acids keeps growing until a stop codon is reached. 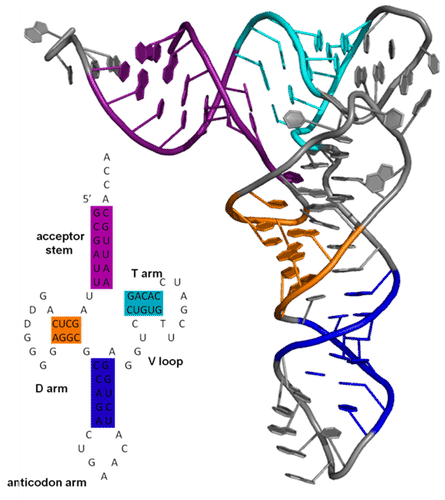 After a polypeptide chain is synthesized, it may undergo additional processes. For example, it may assume a folded shape due to interactions among its amino acids. It may also bind with other polypeptides or with different types of molecules, such as lipids or carbohydrates. Many proteins travel to the Golgi apparatus to be modified for the specific job they will do.