How does the information move from the nucleus, where the DNA is located, to the cytoplasm, where the ribosomes are?

RNA, the other nucleic acid, that’s how. Specifically mRNA. RNA, the middle player in the central dogma. This image is an abstract representation of tRNA. Without tRNA, mRNA, and rRNA, proteins cannot be made.

DNA alone cannot “tell” your cells how to make proteins. It needs the help of RNA, ribonucleic acid, the other main player in the central dogma of molecular biology. Remember, DNA “lives” in the nucleus, but proteins are made on the ribosomes in the cytoplasm. How does the genetic information get from the nucleus to the cytoplasm? RNA is the answer.

RNA, like DNA, is a nucleic acid. However, RNA differs from DNA in several ways. In addition to being smaller than DNA, RNA also

There are three main types of RNA, all of which are involved in making proteins. 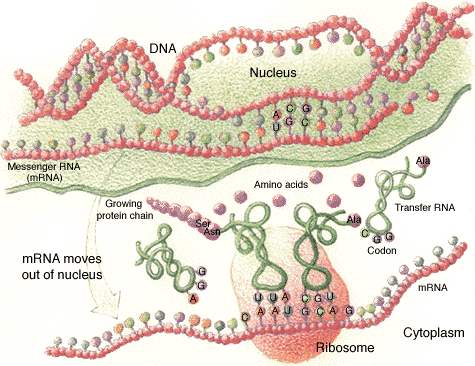 Shown are the three types of RNA and their roles: (1) mRNA contains the genetic message, (2) tRNA transfers the amino acids to the ribosome, (3) rRNA is the main component of the ribosome. More on the roles of the RNAs will be discussed in these concepts: “Transcription of DNA to RNA”, “Genetic Code”, and “Translation of RNA to Protein”.