What are the odds of landing on 25 again?

Assume you are a plant breeder trying to develop a new variety of plant that is more useful to humans. You plan to cross-pollinate an insect-resistant plant with a plant that grows rapidly. Your goal is to produce a variety of plant that is both insect resistant and fast growing. What percentage of the offspring would you expect to have both characteristics? Mendel’s laws can be used to find out. However, to understand how Mendel’s laws can be used in this way, you first need to know about probability. 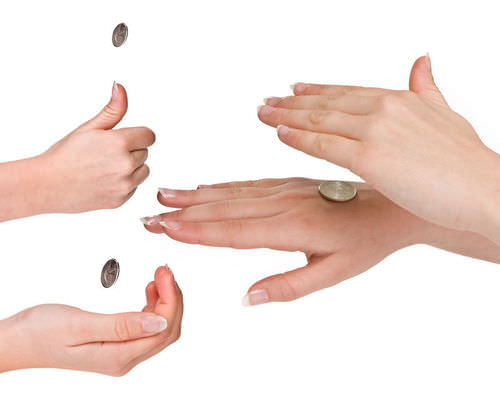 Tossing a Coin. Competitions often begin with the toss of a coin. Why is this a fair way to decide who goes first? If you choose heads, what is the chance that the toss will go your way?

If you toss a coin twice, you might expect to get one head and one tail. But each time you toss the coin, the chance of a head is still 50 percent. Therefore, it’s quite likely that you will get two or even several heads (or tails) in a row. What if you tossed a coin ten times? You would probably get more or less than the expected five heads. For example, you might get seven heads (70 percent) and three tails (30 percent). The more times you toss the coin, however, the closer you will get to 50 percent heads. For example, if you tossed a coin 1000 times, you might get 510 heads and 490 tails. 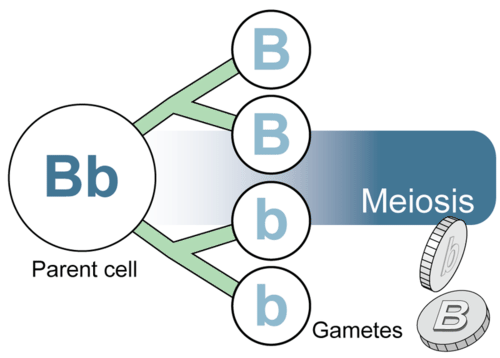 Formation of gametes by meiosis. Paired alleles always separate and go to different gametes during meiosis.

Which of these gametes joins in fertilization with the gamete of another parent plant? This is a matter of chance, like tossing a coin. Thus, we can assume that either type of gamete—one with the B allele or one with the b allele—has an equal chance of uniting with any of the gametes produced by the other parent. Now assume that the other parent is also Bb. If gametes of two Bb parents unite, what is the chance of the offspring having one of each allele like the parents (Bb)? What is the chance of them having a different combination of alleles than the parents (either BB or bb)? To answer these questions, geneticists use a simple tool called a Punnett square, which is the focus of the next concept.