Is this rat hairless?

Yes. Why? The result of a mutation, a change in the DNA sequence. The effects of mutations can vary widely, from being beneficial, to having no effect, to having lethal consequences, and every possibility in between.

The majority of mutations have neither negative nor positive effects on the organism in which they occur. These mutations are called neutral mutations. Examples include silent point mutations. They are neutral because they do not change the amino acids in the proteins they encode.

Many other mutations have no effect on the organism because they are repaired before protein synthesis occurs. Cells have multiple repair mechanisms to fix mutations in DNA. One way DNA can be repaired is illustrated in the figure below. If a cell’s DNA is permanently damaged and cannot be repaired, the cell is likely to be prevented from dividing. 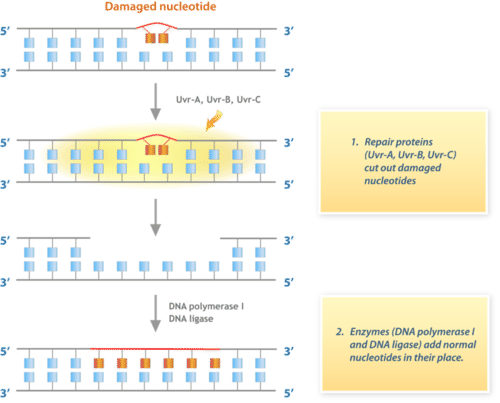