What does radiation contamination do?

It mutates DNA. The Chernobyl disaster was a nuclear accident that occurred on April 26, 1986. It is considered the worst nuclear power plant accident in history. A Russian publication concludes that 985,000 excess cancers occurred between 1986 and 2004 as a result of radioactive contamination. The 2011 report of the European Committee on Radiation Risk calculates a total of 1.4 million excess cancers occurred as a result of this contamination.

Mutations have many possible causes. Some mutations seem to happen spontaneously without any outside influence. They can occur when mistakes are made during DNA replication or transcription. Other mutations are caused by environmental factors. Anything in the environment that can cause a mutation is known as a mutagen. Examples of mutagens are pictured in the figure below. 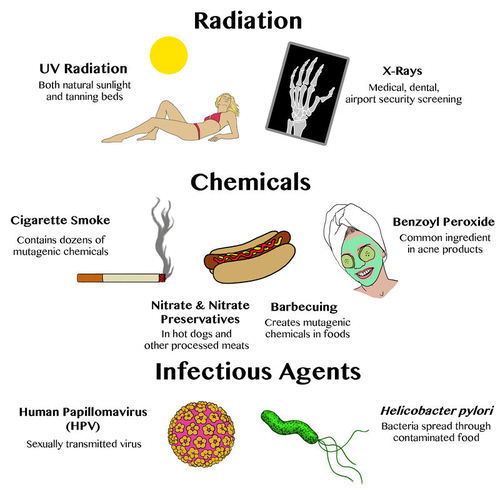 Examples of Mutagens. Types of mutagens include radiation, chemicals, and infectious agents. Do you know of other examples of each type of mutagen shown here?

There are five common types of spontaneous mutations. These are described in the Table below.

Though the area immediately around the Chernobyl disaster may not be safe for human life for thousands of years, the Exclusion Zone around the Chernobyl nuclear power station has become a haven for wildlife. As humans were evacuated from the area 25 years ago, existing animal populations multiplied and rare species not seen for centuries have returned or have been reintroduced, for example lynx, wild boar, wolf, Eurasian brown bear, European bison, Przewalski’s horse, and eagle owl. The Exclusion Zone is so lush with wildlife and greenery that in 2007 the Ukrainian government designated it a wildlife sanctuary. It is now one of the largest wildlife sanctuaries in Europe.