Coiled bundles of DNA and proteins, containing hundreds or thousands of genes. What are these things?

Chromosomes. These ensure that each cell receives the proper amount of DNA during cell division. And usually people have 46 of them, 23 from each parent.

Each species has a characteristic number of chromosomes. Chromosomes are coiled structures made of DNA and proteins called histones (the figure below). Chromosomes are the form of the genetic material of a cell during cell division. See the “Chromosomes” section for additional information. 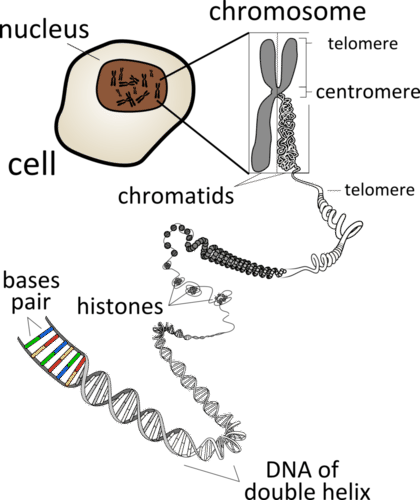 The human genome has 23 pairs of chromosomes located in the nucleus of somatic cells. Each chromosome is composed of genes and other DNA wound around histones (proteins) into a tightly coiled molecule.

The human species is characterized by 23 pairs of chromosomes, as shown in the figure below. 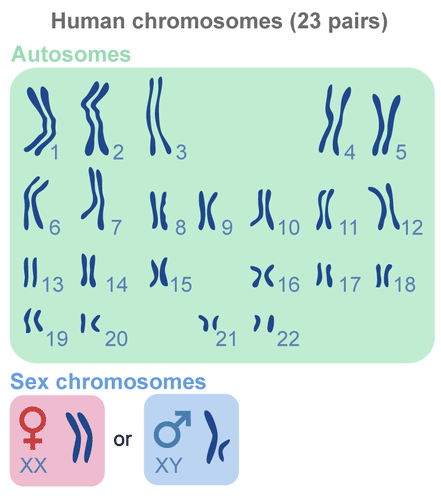 Of the 23 pairs of human chromosomes, 22 pairs are autosomes (numbers 1â€“22 in the figure above). Autosomes are chromosomes that contain genes for characteristics that are unrelated to sex. These chromosomes are the same in males and females. The great majority of human genes are located on autosomes.

Humans have an estimated 20,000 to 22,000 genes. This may sound like a lot, but it really isn’t. Far simpler species have almost as many genes as humans. However, human cells use splicing and other processes to make multiple proteins from the instructions encoded in a single gene. Of the 3 billion base pairs in the human genome, only about 25 percent make up genes and their regulatory elements. The functions of many of the other base pairs are still unclear.