It can be. Achondroplasia is the most common form of dwarfism in humans, and it is caused by a dominant mutation. The mutation can be passed from one generation to the next.

A mutant recessive allele, such as the allele that causes sickle cell anemia (see the figure below and the link that follows), is not expressed in people who inherit just one copy of it. These people are called carriers. They do not have the disorder themselves, but they carry the mutant allele and can pass it to their offspring. Thus, the allele is likely to pass on to the next generation rather than die out. 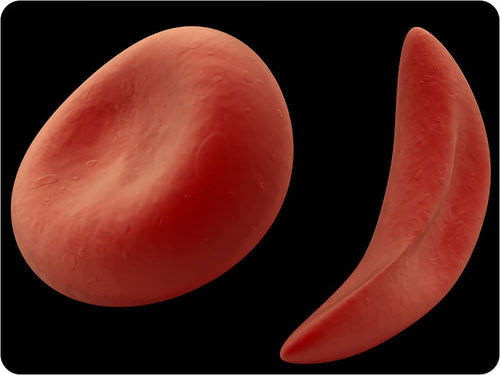 Sickle-Shaped and Normal Red Blood Cells. Sickle cell anemia is an autosomal recessive disorder. The mutation that causes the disorder affects just one amino acid in a single protein, but it has serious consequences for the affected person. This photo shows the sickle shape of red blood cells in people with sickle cell anemia.

Mistakes may occur during meiosis that result in nondisjunction. This is the failure of replicated chromosomes to separate during meiosis (the animation at the link below shows how this happens). Some of the resulting gametes will be missing a chromosome, while others will have an extra copy of the chromosome. If such gametes are fertilized and form zygotes, they usually do not survive. If they do survive, the individuals are likely to have serious genetic disorders. The table below lists several genetic disorders that are caused by abnormal numbers of chromosomes. Most chromosomal disorders involve the X chromosome. Look back at the X and Y chromosomes and you will see why. The X and Y chromosomes are very different in size, so nondisjunction of the sex chromosomes occurs relatively often. 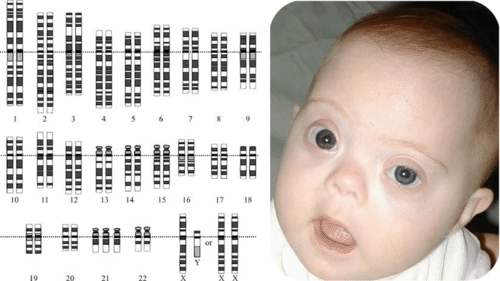 (left) Trisomy 21 (Down Syndrome) Karyotype. A karyotype is a picture of a cell’s chromosomes. Note the extra chromosome 21. (right) Child with Down syndrome, exhibiting characteristic facial appearance.

A genetic disorder that is caused by a mutation can be inherited. Therefore, people with a genetic disorder in their family may be concerned about having children with the disorder. Professionals known as genetic counselors can help them understand the risks of their children being affected. If they decide to have children, they may be advised to have prenatal (“before birth”) testing to see if the fetus has any genetic abnormalities. One method of prenatal testing is amniocentesis. In this procedure, a few fetal cells are extracted from the fluid surrounding the fetus, and the fetal chromosomes are examined.

The symptoms of genetic disorders can sometimes be treated, but cures for genetic disorders are still in the early stages of development. One potential cure that has already been used with some success is gene therapy. This involves inserting normal genes into cells with mutant genes.

If you could learn your risk of getting cancer or another genetic disease, would you? Though this is a personal decision, it is a possibility. A number of companies now make it easy to order medical genetic tests through the Web.