How do you go from four letters to 20 amino acids?

You need a code. And the code that changes the information embedded in DNA and RNA into ordered amino acids and proteins is the genetic code. And every living organism uses the same genetic code.

How is the information in a gene encoded? The answer is the genetic code. The genetic code consists of the sequence of nitrogen bases—A, C, G, U—in an mRNA chain. The four bases make up the “letters” of the genetic code. The letters are combined in groups of three to form code “words,” called codons. Each codon stands for (encodes) one amino acid, unless it codes for a start or stop signal.

There are 20 common amino acids in proteins. There are 64 possible codons, more than enough to code for the 20 amino acids. The genetic code is shown in the figure below. 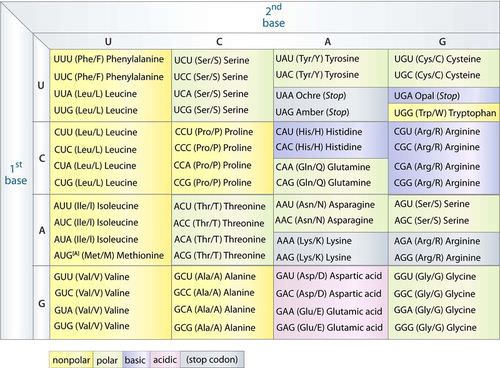 The Genetic Code. To find the amino acid for a particular codon, find the cell in the table for the first and second bases of the codon. Then, within that cell, find the codon with the correct third base. For example CUG codes for leucine, AAG codes for lysine, and GGG codes for glycine.

As shown in the figure above, the codon AUG codes for the amino acid methionine. This codon is also the start codon that begins translation. The start codon establishes the reading frame of mRNA. The reading frame is the way the letters are divided into codons. After the AUG start codon, the next three letters are read as the second codon. The next three letters after that are read as the third codon, and so on. This is illustrated in the figure below. The mRNA molecule is read, codon by codon, until a stop codon is reached. UAG, UGA, and UAA are all stop codons. They do not code for any amino acids. Stop codons are also known as termination codons. 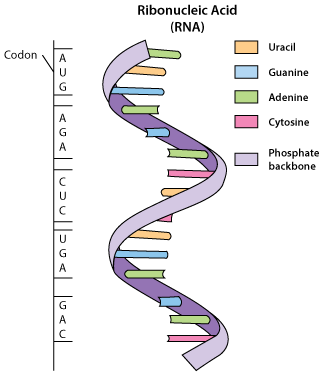 Reading the Genetic Code. The genetic code is read three bases at a time. Codons are the code words of the genetic code. Which amino acid does codon 2 in the drawing stand for?

Characteristics of the Genetic Code

The genetic code has a number of important characteristics.