That is the key question. Gene regulation in eukaryotes is a highly regulated process usually involving many proteins, which either bind to each other or bind to the DNA.

In eukaryotic cells, the start of transcription is one of the most complicated parts of gene regulation. There may be many regulatory proteins and regulatory elements involved. Regulation may also involve enhancers. Enhancers are distant regions of DNA that can loop back to interact with a gene’s promoter.

Different types of cells have unique patterns of regulatory elements that result in only the necessary genes being transcribed. That’s why a skin cell and nerve cell, for example, are so different from each other. However, some patterns of regulatory elements are common to all genes, regardless of the cells in which they occur. An example is the TATA box, so named because it has a core sequence of TATAAA. This is a regulatory element that is part of the promoter of most eukaryotic genes. A number of regulatory proteins bind to the TATA box, forming a multi-protein complex. It is only when all of the appropriate proteins are bound to the TATA box that RNA polymerase recognizes the complex and binds to the promoter. Once RNA polymerase binds, transcription begins.

The regulation of gene expression is extremely important during the development of an organism. Regulatory proteins must turn on certain genes in particular cells at just the right time so the organism develops normal organs and organ systems. Homeobox genes are an example of genes that regulate development. They code for regulatory proteins that switch on whole series of major developmental genes. In insects, homeobox genes called hox genes ensure that body parts such as limbs develop in the correct place. the figure below shows how a mutation in a hox gene can affect an insect’s development. Other organisms, including humans, also have hox genes. 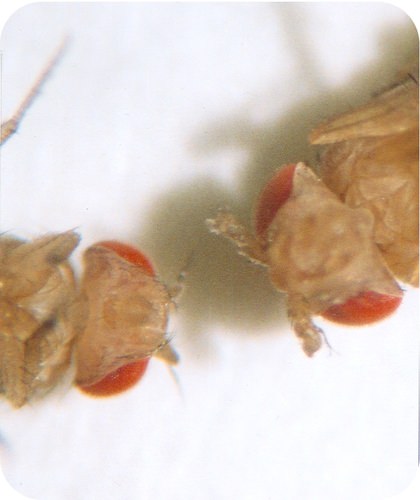 Effect of Hox Gene Mutation. Scientists caused a mutation in a hox gene of this fruit fly. As a result of the mutation, a leg grew out of its head where an antenna should have developed.

The mutations that cause cancer generally occur in two types of regulatory genes: tumor-suppressor genes and proto-oncogenes (see the figure below). These genes produce regulatory proteins that control the cell cycle. When the genes mutate, cells with mutations divide rapidly and without limits, potentially resulting in a tumor and cancer. 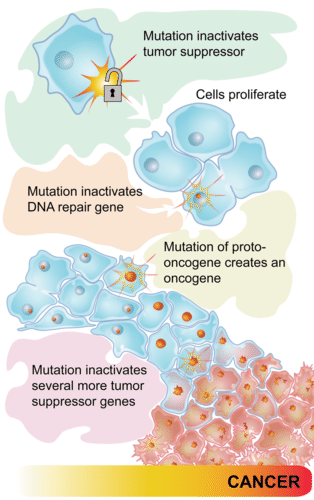 How Cancer Develops. This flow chart shows how a series of mutations in tumor-suppressor genes and proto-oncogenes leads to cancer.