How do these four structures form DNA?

In an extremely elegant model, that’s how. As you will soon see, the model predicts how the DNA sequence can code for proteins, and how the molecule can be replicated.

Other important discoveries about DNA were made in the mid-1900s by Erwin Chargaff. He studied DNA from many different species. He was especially interested in the four different nitrogen bases of DNA: adenine (A), guanine (G), cytosine (C), and thymine (T) (see the figure below). Chargaff found that concentrations of the four bases differed from one species to another. However, within each species, the concentration of adenine was always about the same as the concentration of thymine. The same was true of the concentrations of guanine and cytosine. These observations came to be known as Chargaff’s rules. The significance of the rules would not be revealed until the structure of DNA was discovered. 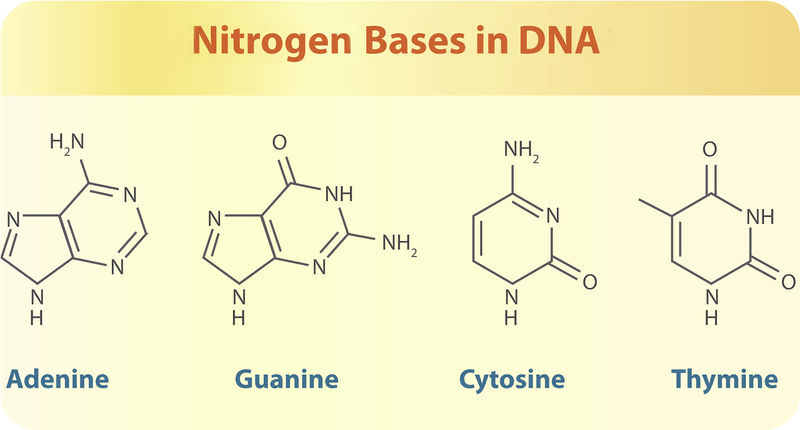 Nitrogen Bases in DNA. The DNA of all species has the same four nitrogen bases.

After DNA was found to be the genetic material, scientists wanted to learn more about it. James Watson and Francis Crick are usually given credit for discovering that DNA has a double helix shape, like a spiral staircase (see the figure below). The discovery was based on the prior work of Rosalind Franklin and other scientists, who had used X rays to learn more about DNA’s structure. Franklin and these other scientists have not always been given credit for their contributions. 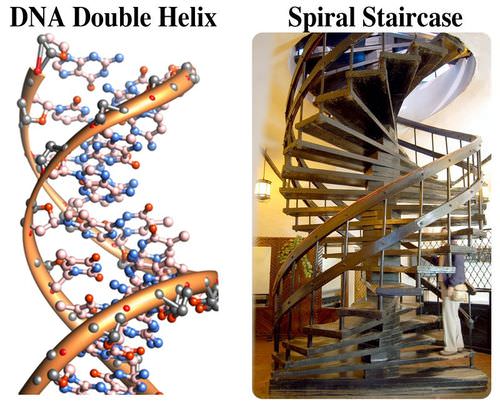 The double helix shape of DNA, together with Chargaff’s rules, led to a better understanding of DNA. DNA, as a nucleic acid, is made from nucleotide monomers, and the DNA double helix consists of two polynucleotide chains. Each nucleotide consists of a sugar (deoxyribose), a phosphate group, and a nitrogen-containing base (A, C, G, or T).

Scientists concluded that bonds (hydrogen bonds) between complementary bases hold together the two polynucleotide chains of DNA. Adenine always bonds with its complementary base, thymine. Cytosine always bonds with its complementary base, guanine. If you look at the nitrogen bases in the figure above, you will see why. Adenine and guanine have a two-ring structure. Cytosine and thymine have just one ring. If adenine were to bind with guanine and cytosine with thymine, the distance between the two DNA chains would be variable. However, when a one-ring molecule binds with a two-ring molecule, the distance between the two chains is kept constant. This maintains the uniform shape of the DNA double helix. These base pairs (A-T or G-C) stick into the middle of the double helix, forming, in essence, the steps of the spiral staircase.

Knowledge of DNA’s structure helped scientists understand how DNA replicates. DNA replication is the process in which DNA is copied. It occurs during the synthesis (S) phase of the eukaryotic cell cycle. DNA replication begins when an enzyme, DNA helicase, breaks the bonds between complementary bases in DNA (see the figure below). This exposes the bases inside the molecule so they can be “read” by another enzyme, DNA polymerase, and used to build two new DNA strands with complementary bases, also by DNA polymerase. The two daughter molecules that result each contain one strand from the parent molecule and one new strand that is complementary to it. As a result, the two daughter molecules are both identical to the parent molecule. DNA replication is a semi-conservative process because half of the parent DNA molecule is conserved in each of the two daughter DNA molecules.

The process of DNA replication is actually much more complex than this simple summary. 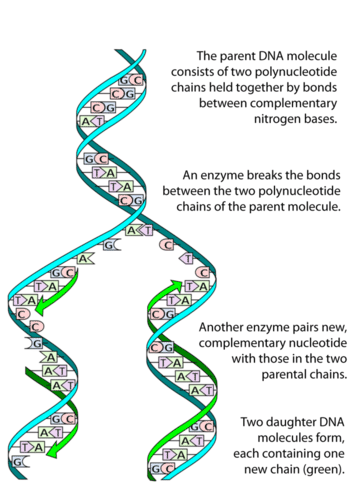 DNA Replication. DNA replication is a semi-conservative process. Half of the parent DNA molecule is conserved in each of the two daughter DNA molecules.