Developing better crops is a significant aspect of biotechnology. Crops that are resistant to damage from insects or droughts must have a significant role in the world’s future. And it all starts in the lab.

Methods of biotechnology can be used for many practical purposes. They are used widely in both medicine and agriculture.

In addition to gene therapy for genetic disorders, biotechnology can be used to transform bacteria so they are able to make human proteins. the figure below shows how this is done to produce a cytokine, which is a small protein that helps fight infections. Proteins made by the bacteria are injected into people who cannot produce them because of mutations. 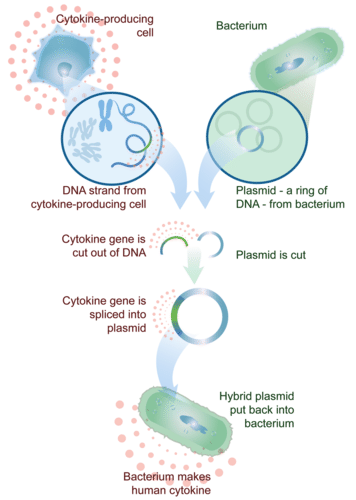 Genetically Engineering Bacteria to Produce a Human Protein. Bacteria can be genetically engineered to produce a human protein, such as a cytokine. A cytokine is a small protein that helps fight infections.

Insulin was the first human protein to be produced in this way. Insulin helps cells take up glucose from the blood. People with type 1 diabetes have a mutation in the gene that normally codes for insulin. Without insulin, their blood glucose rises to harmfully high levels. At present, the only treatment for type 1 diabetes is the injection of insulin from outside sources. Until recently, there was no known way to make insulin outside the human body. The problem was solved by gene cloning. The human insulin gene was cloned and used to transform bacterial cells, which could then produce large quantities of human insulin.

We know that, thanks to our DNA, each of us is a little bit different. Some of those differences are obvious, like eye and hair color. Others are not so obvious, like how our bodies react to medication. Researchers are beginning to look at how to tailor medical treatments to our genetic profiles, in a relatively new field called pharmacogenomics. Some of the biggest breakthroughs have been in cancer treatment.

Imagine living cells acting as memory devices, biofuels brewing from yeast, or a light receptor taken from algae that makes photographs on a plate of bacteria. The new field of synthetic biology is making biology easier to engineer so that new functions can be derived from living systems.

Biotechnology has been used to create transgenic crops. Transgenic crops are genetically modified with new genes that code for traits useful to humans. The diagram in the figure below shows how a transgenic crop is created. 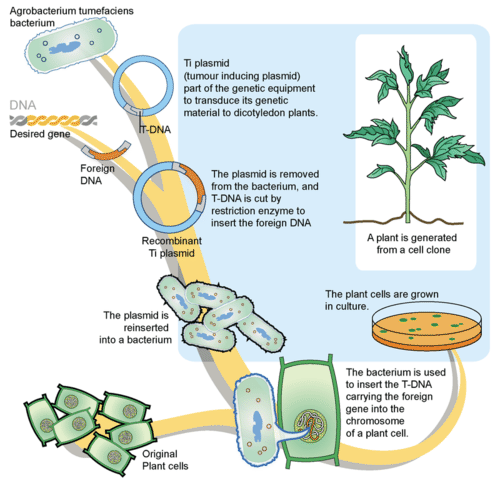 Creating a Transgenic Crop. A transgenic crop is genetically modified to be more useful to humans. The bacterium transfers the T-DNA (from the Ti plasmid) fragment with the desired gene into the host plant’s nuclear genome.

Transgenic crops have been created with a variety of different traits, such as yielding more food, tasting better, surviving drought, and resisting insect pests. Scientists have even created a transgenic purple tomato that contains a cancer-fighting compound and others that have high levels of antioxidants (see the figure below).

Transgenic Purple Tomato. A purple tomato is genetically modified to contain a cancer-fighting compound. A gene for the compound was transferred into normal red tomatoes.

Biotechnology has also had tremendous impacts in the forensic sciences.