Parasitism describes a symbiotic relationship in which one member of the association benefits at the expense of the other. Both parasites and pathogens harm the host; however, the pathogen causes a disease, whereas the parasite usually does not. Commensalism occurs when one member benefits without affecting the other.

The production of sufficient good-quality crops is essential to human existence. Plant diseases have ruined crops, bringing widespread famine. Many plant pathogens are fungi that cause tissue decay and eventual death of the host (see the figure below). In addition to destroying plant tissue directly, some plant pathogens spoil crops by producing potent toxins. Fungi are also responsible for food spoilage and the rotting of stored crops. For example, the fungus Claviceps purpurea causes ergot, a disease of cereal crops (especially of rye).

Although the fungus reduces the yield of cereals, the effects of the ergot’s alkaloid toxins on humans and animals are of much greater significance. In animals, the disease is referred to as ergotism. The most common signs and symptoms are convulsions, hallucination, gangrene, and loss of milk in cattle. The active ingredient of ergot is lysergic acid, which is a precursor of the drug LSD. Smuts, rusts, and powdery or downy mildew are other examples of common fungal pathogens that affect crops. 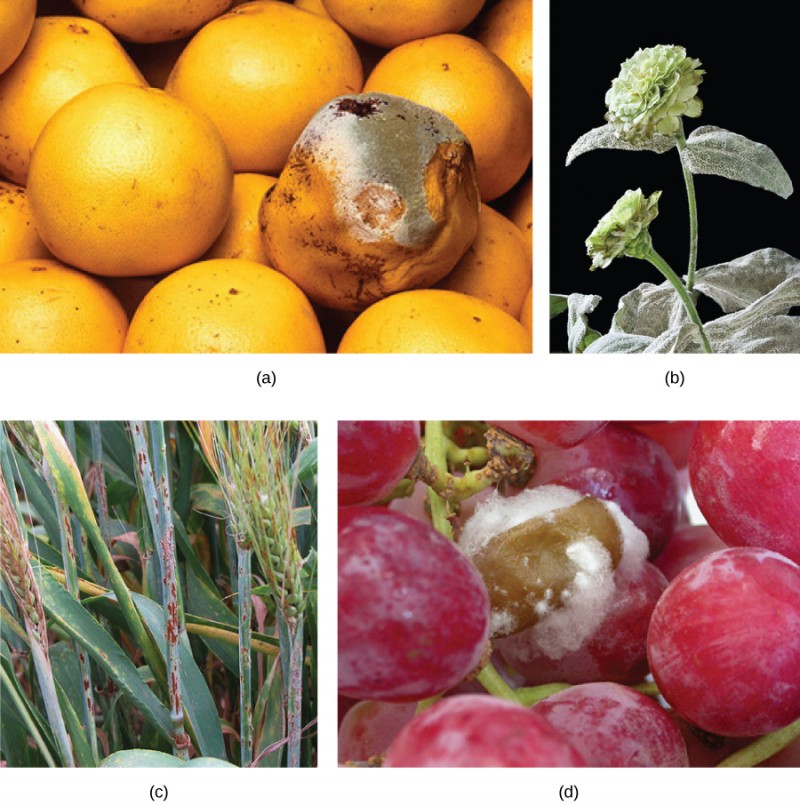 Aflatoxins are toxic, carcinogenic compounds released by fungi of the genus Aspergillus. Periodically, harvests of nuts and grains are tainted by aflatoxins, leading to massive recall of produce. This sometimes ruins producers and causes food shortages in developing countries.