Symbiosis is the ecological interaction between two organisms that live together. The definition does not describe the quality of the interaction. When both members of the association benefit, the symbiotic relationship is called mutualistic. Fungi form mutualistic associations with many types of organisms, including cyanobacteria, algae, plants, and animals.

One of the most remarkable associations between fungi and plants is the establishment of mycorrhizae. Mycorrhiza, which comes from the Greek words myco meaning fungus and rhizo meaning root, refers to the association between vascular plant roots and their symbiotic fungi. Somewhere between 80 and 90 percent of all plant species have mycorrhizal partners. In a mycorrhizal association, the fungal mycelia use their extensive network of hyphae and large surface area in contact with the soil to channel water and minerals from the soil into the plant. In exchange, the plant supplies the products of photosynthesis to fuel the metabolism of the fungus.

There are a number of types of mycorrhizae. Ectomycorrhizae (“outside” mycorrhiza) depend on fungi enveloping the roots in a sheath (called a mantle) and a Hartig net of hyphae that extends into the roots between cells (see the figure below). The fungal partner can belong to the Ascomycota, Basidiomycota or Zygomycota. In a second type, the Glomeromycete fungi form vesicular–arbuscular interactions with arbuscular mycorrhiza (sometimes called endomycorrhizae). In these mycorrhiza, the fungi form arbuscules that penetrate root cells and are the site of the metabolic exchanges between the fungus and the host plant (see this figure below and this figure below). The arbuscules (from the Latin for little trees) have a shrub-like appearance. Orchids rely on a third type of mycorrhiza. Orchids are epiphytes that form small seeds without much storage to sustain germination and growth. Their seeds will not germinate without a mycorrhizal partner (usually a Basidiomycete). After nutrients in the seed are depleted, fungal symbionts support the growth of the orchid by providing necessary carbohydrates and minerals. Some orchids continue to be mycorrhizal throughout their lifecycle. 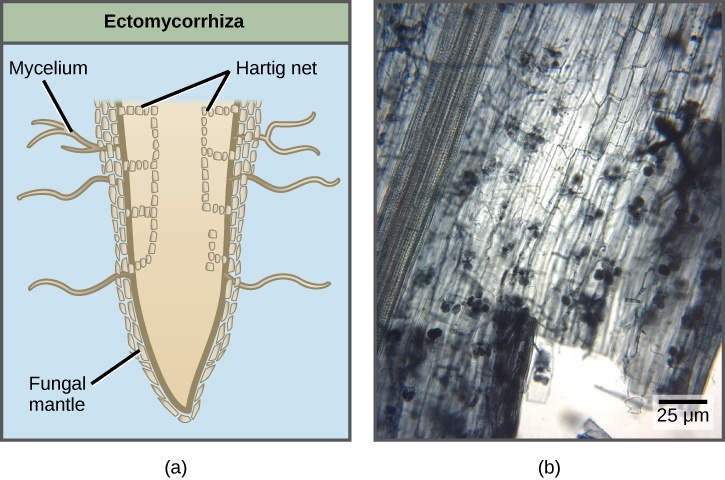 (a) Ectomycorrhiza and (b) arbuscular mycorrhiza have different mechanisms for interacting with the roots of plants. (credit b: MS Turmel, University of Manitoba, Plant Science Department)

If symbiotic fungi are absent from the soil, what impact do you think this would have on plant growth?

Without mycorrhiza, plants cannot absorb adequate nutrients, which stunts their growth. Addition of fungal spores to sterile soil can alleviate this problem.

The (a) infection of Pinus radiata (Monterey pine) roots by the hyphae of Amanita muscaria (fly amanita) causes the pine tree to produce many small, branched rootlets. The Amanita hyphae cover these small roots with a white mantle. (b) Spores (round bodies) and hyphae (thread-like structures) are evident in this light micrograph of an arbuscular mycorrhiza between a fungus and the root of a corn plant. (credit a: modification of work by Randy Molina, USDA; credit b: modification of work by Sara Wright, USDA-ARS; scale-bar data from Matt Russell)

Other examples of fungus–plant mutualism include the endophytes: fungi that live inside tissue without damaging the host plant. Endophytes release toxins that repel herbivores, or confer resistance to environmental stress factors, such as infection by microorganisms, drought, or heavy metals in soil.

Mycorrhizae are the mutually beneficial symbiotic association between roots of vascular plants and fungi. A well-accepted theory proposes that fungi were instrumental in the evolution of the root system in plants and contributed to the success of Angiosperms. The bryophytes (mosses and liverworts), which are considered the most primitive plants and the first to survive on dry land, do not have a true root system; some have vesicular–arbuscular mycorrhizae and some do not. They depend on a simple rhizoid (an underground organ) and cannot survive in dry areas. True roots appeared in vascular plants. Vascular plants that developed a system of thin extensions from the rhizoids (found in mosses) are thought to have had a selective advantage because they had a greater surface area of contact with the fungal partners than the mosses and liverworts, thus availing themselves of more nutrients in the ground.

Fossil records indicate that fungi preceded plants on dry land. The first association between fungi and photosynthetic organisms on land involved moss-like plants and endophytes. These early associations developed before roots appeared in plants. Slowly, the benefits of the endophyte and rhizoid interactions for both partners led to present-day mycorrhizae; up to about 90 percent of today’s vascular plants have associations with fungi in their rhizosphere. The fungi involved in mycorrhizae display many characteristics of primitive fungi; they produce simple spores, show little diversification, do not have a sexual reproductive cycle, and cannot live outside of a mycorrhizal association. The plants benefited from the association because mycorrhizae allowed them to move into new habitats because of increased uptake of nutrients, and this gave them a selective advantage over plants that did not establish symbiotic relationships.

Lichens display a range of colors and textures (see the figure below) and can survive in the most unusual and hostile habitats. They cover rocks, gravestones, tree bark, and the ground in the tundra where plant roots cannot penetrate. Lichens can survive extended periods of drought, when they become completely desiccated, and then rapidly become active once water is available again.

Explore the world of lichens using this website from Oregon State University.

Lichens are not a single organism, but rather an example of a mutualism, in which a fungus (usually a member of the Ascomycota or Basidiomycota phyla) lives in close contact with a photosynthetic organism (a eukaryotic alga or a prokaryotic cyanobacterium) (see the figure below). Generally, neither the fungus nor the photosynthetic organism can survive alone outside of the symbiotic relationship. The body of a lichen, referred to as a thallus, is formed of hyphae wrapped around the photosynthetic partner. The photosynthetic organism provides carbon and energy in the form of carbohydrates. Some cyanobacteria fix nitrogen from the atmosphere, contributing nitrogenous compounds to the association. In return, the fungus supplies minerals and protection from dryness and excessive light by encasing the algae in its mycelium. The fungus also attaches the symbiotic organism to the substrate. 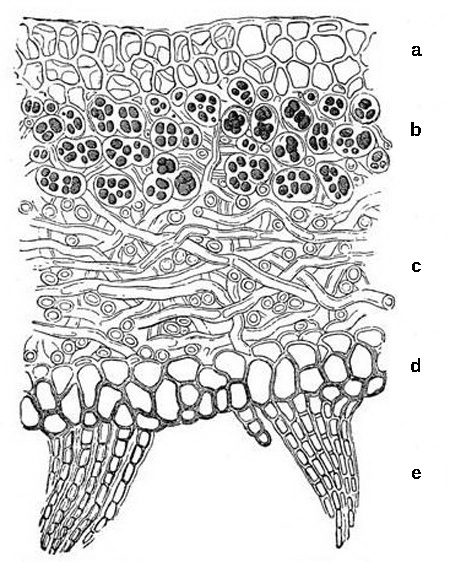 The thallus of lichens grows very slowly, expanding its diameter a few millimeters per year. Both the fungus and the alga participate in the formation of dispersal units for reproduction. Lichens produce soredia, clusters of algal cells surrounded by mycelia. Soredia are dispersed by wind and water and form new lichens.

Lichens are extremely sensitive to air pollution, especially to abnormal levels of nitrogen and sulfur. The U.S. Forest Service and National Park Service can monitor air quality by measuring the relative abundance and health of the lichen population in an area. Lichens fulfill many ecological roles. Caribou and reindeer eat lichens, and they provide cover for small invertebrates that hide in the mycelium. In the production of textiles, weavers used lichens to dye wool for many centuries until the advent of synthetic dyes.

Lichens are used to monitor the quality of air. Read more on this website from the United States Forest Service.

Fungi have evolved mutualisms with numerous insects in Phylum Arthropoda: jointed, legged invertebrates. Arthropods depend on the fungus for protection from predators and pathogens, while the fungus obtains nutrients and a way to disseminate spores into new environments. The association between species of Basidiomycota and scale insects is one example. The fungal mycelium covers and protects the insect colonies. The scale insects foster a flow of nutrients from the parasitized plant to the fungus.

In a second example, leaf-cutting ants of Central and South America literally farm fungi. They cut disks of leaves from plants and pile them up in gardens (see the figure below). Fungi are cultivated in these disk gardens, digesting the cellulose in the leaves that the ants cannot break down. Once smaller sugar molecules are produced and consumed by the fungi, the fungi in turn become a meal for the ants. The insects also patrol their garden, preying on competing fungi. Both ants and fungi benefit from the association. The fungus receives a steady supply of leaves and freedom from competition, while the ants feed on the fungi they cultivate. 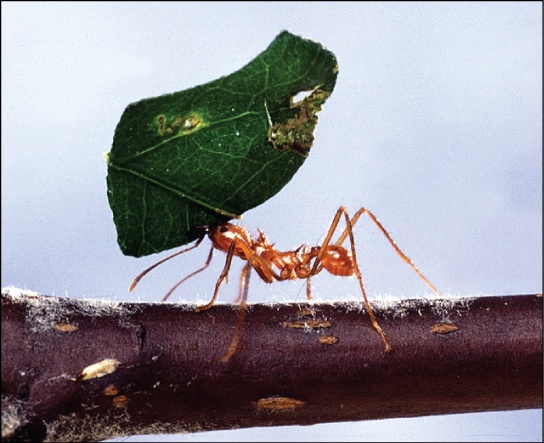