The food web would be incomplete without organisms that decompose organic matter (see the figure below). Some elements—such as nitrogen and phosphorus—are required in large quantities by biological systems, and yet are not abundant in the environment. The action of fungi releases these elements from decaying matter, making them available to other living organisms. Trace elements present in low amounts in many habitats are essential for growth, and would remain tied up in rotting organic matter if fungi and bacteria did not return them to the environment via their metabolic activity. 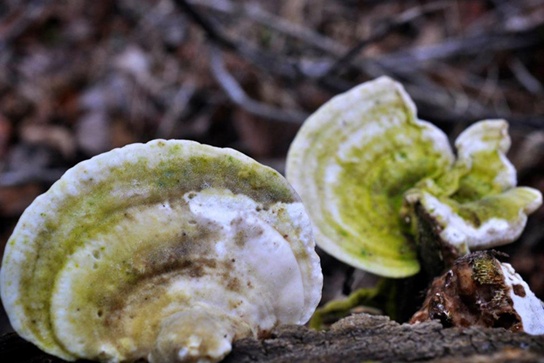 Fungi are an important part of ecosystem nutrient cycles. These bracket fungi growing on the side of a tree are the fruiting structures of a basidiomycete. They receive their nutrients through their hyphae, which invade and decay the tree trunk. (credit: Cory Zanker)

The ability of fungi to degrade many large and insoluble molecules is due to their mode of nutrition. As seen earlier, digestion precedes ingestion. Fungi produce a variety of exoenzymes to digest nutrients. The enzymes are either released into the substrate or remain bound to the outside of the fungal cell wall. Large molecules are broken down into small molecules, which are transported into the cell by a system of protein carriers embedded in the cell membrane. Because the movement of small molecules and enzymes is dependent on the presence of water, active growth depends on a relatively high percentage of moisture in the environment.

As saprobes, fungi help maintain a sustainable ecosystem for the animals and plants that share the same habitat. In addition to replenishing the environment with nutrients, fungi interact directly with other organisms in beneficial, and sometimes damaging, ways (see the figure below). 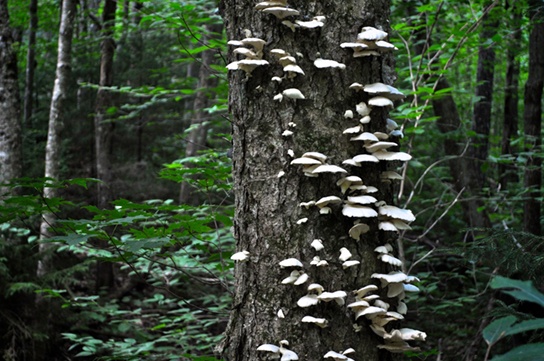 Shelf fungi, so called because they grow on trees in a stack, attack and digest the trunk or branches of a tree. While some shelf fungi are found only on dead trees, others can parasitize living trees and cause eventual death, so they are considered serious tree pathogens. (credit: Cory Zanker)