The only class in the Phylum Chytridiomycota is the Chytridiomycetes. The chytrids are the simplest and most primitive Eumycota, or true fungi. The evolutionary record shows that the first recognizable chytrids appeared during the late pre-Cambrian period, more than 500 million years ago. Like all fungi, chytrids have chitin in their cell walls, but one group of chytrids has both cellulose and chitin in the cell wall. Most chytrids are unicellular; a few form multicellular organisms and hyphae, which have no septa between cells (coenocytic). They produce gametes and diploid zoospores that swim with the help of a single flagellum.

The ecological habitat and cell structure of chytrids have much in common with protists. Chytrids usually live in aquatic environments, although some species live on land. Some species thrive as parasites on plants, insects, or amphibians (see the figure below), while others are saprobes. The chytrid species Allomyces is well characterized as an experimental organism. Its reproductive cycle includes both asexual and sexual phases. Allomyces produces diploid or haploid flagellated zoospores in a sporangium. 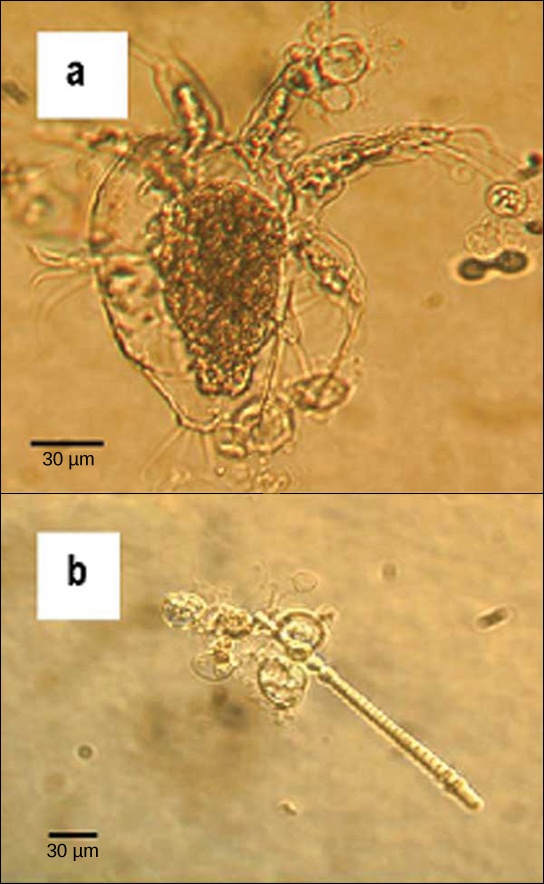 The chytrid Batrachochytrium dendrobatidis is seen in these light micrographs as transparent spheres growing on (a) a freshwater arthropod and (b) algae. This chytrid causes skin diseases in many species of amphibians, resulting in species decline and extinction. (credit: modification of work by Johnson ML, Speare R., CDC)