Fungi are eukaryotes, and as such, have a complex cellular organization. As eukaryotes, fungal cells contain a membrane-bound nucleus. The DNA in the nucleus is wrapped around histone proteins, as is observed in other eukaryotic cells. A few types of fungi have structures comparable to bacterial plasmids (loops of DNA); however, the horizontal transfer of genetic information from one mature bacterium to another rarely occurs in fungi. Fungal cells also contain mitochondria and a complex system of internal membranes, including the endoplasmic reticulum and Golgi apparatus.

Unlike plant cells, fungal cells do not have chloroplasts or chlorophyll. Many fungi display bright colors arising from other cellular pigments, ranging from red to green to black. The poisonous Amanita muscaria (fly agaric) is recognizable by its bright red cap with white patches (see the figure below). Pigments in fungi are associated with the cell wall and play a protective role against ultraviolet radiation. Some fungal pigments are toxic. 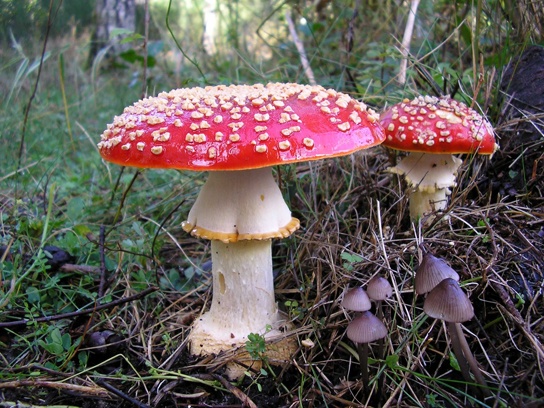 Like plant cells, fungal cells have a thick cell wall. The rigid layers of fungal cell walls contain complex polysaccharides called chitin and glucans. Chitin, also found in the exoskeleton of insects, gives structural strength to the cell walls of fungi. The wall protects the cell from desiccation and predators. Fungi have plasma membranes similar to other eukaryotes, except that the structure is stabilized by ergosterol: a steroid molecule that replaces the cholesterol found in animal cell membranes. Most members of the kingdom Fungi are nonmotile. Flagella are produced only by the gametes in the primitive Phylum Chytridiomycota. 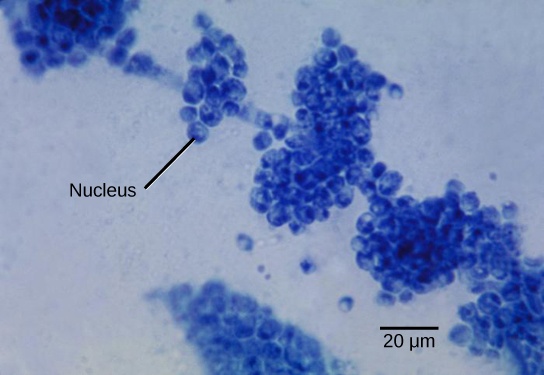 Candida albicans is a yeast cell and the agent of candidiasis and thrush. This organism has a similar morphology to coccus bacteria; however, yeast is a eukaryotic organism (note the nucleus). (credit: modification of work by Dr. Godon Roberstad, CDC; scale-bar data from Matt Russell)

Most fungi are multicellular organisms. They display two distinct morphological stages: the vegetative and reproductive. The vegetative stage consists of a tangle of slender thread-like structures called hyphae (singular, hypha), whereas the reproductive stage can be more conspicuous. The mass of hyphae is a mycelium (see the figure below). It can grow on a surface, in soil or decaying material, in a liquid, or even on living tissue. Although individual hyphae must be observed under a microscope, the mycelium of a fungus can be very large, with some species truly being “the fungus humongous.” The giant Armillaria solidipes (honey mushroom) is considered the largest organism on Earth, spreading across more than 2,000 acres of underground soil in eastern Oregon; it is estimated to be at least 2,400 years old. 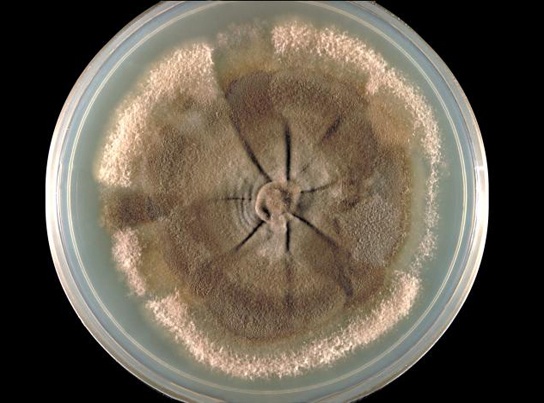 The mycelium of the fungus Neotestudina rosati can be pathogenic to humans. The fungus enters through a cut or scrape and develops a mycetoma, a chronic subcutaneous infection. (credit: CDC)

Most fungal hyphae are divided into separate cells by endwalls called septa (singular, septum) (see the (a) and (c) parts of the figure below). In most phyla of fungi, tiny holes in the septa allow for the rapid flow of nutrients and small molecules from cell to cell along the hypha. They are described as perforated septa. The hyphae in bread molds (which belong to the Phylum Zygomycota) are not separated by septa. Instead, they are formed by large cells containing many nuclei, an arrangement described as coenocytic hyphae (see the (b) part of the figure below). 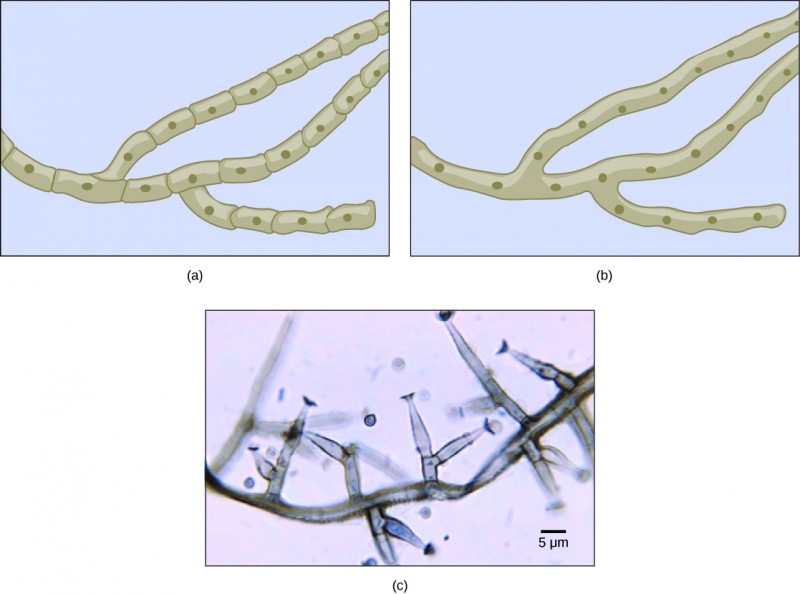 Fungal hyphae may be (a) septated or (b) coenocytic (coeno- = “common”; -cytic = “cell”) with many nuclei present in a single hypha. A bright field light micrograph of (c) Phialophora richardsiae shows septa that divide the hyphae. (credit c: modification of work by Dr. Lucille Georg, CDC; scale-bar data from Matt Russell)

Fungi thrive in environments that are moist and slightly acidic, and can grow with or without light. They vary in their oxygen requirement. Most fungi are obligate aerobes, requiring oxygen to survive. Other species, such as the Chytridiomycota that reside in the rumen of cattle, are are obligate anaerobes, in that they only use anaerobic respiration because oxygen will disrupt their metabolism or kill them. Yeasts are intermediate, being faculative anaerobes. This means that they grow best in the presence of oxygen using aerobic respiration, but can survive using anaerobic respiration when oxygen is not available. The alcohol produced from yeast fermentation is used in wine and beer production.

Like animals, fungi are heterotrophs; they use complex organic compounds as a source of carbon, rather than fix carbon dioxide from the atmosphere as do some bacteria and most plants. In addition, fungi do not fix nitrogen from the atmosphere. Like animals, they must obtain it from their diet. However, unlike most animals, which ingest food and then digest it internally in specialized organs, fungi perform these steps in the reverse order; digestion precedes ingestion. First, exoenzymes are transported out of the hyphae, where they process nutrients in the environment. Then, the smaller molecules produced by this external digestion are absorbed through the large surface area of the mycelium. As with animal cells, the polysaccharide of storage is glycogen, rather than starch, as found in plants.

Fungi are mostly saprobes (saprophyte is an equivalent term): organisms that derive nutrients from decaying organic matter. They obtain their nutrients from dead or decomposing organic matter: mainly plant material. Fungal exoenzymes are able to break down insoluble polysaccharides, such as the cellulose and lignin of dead wood, into readily absorbable glucose molecules. The carbon, nitrogen, and other elements are thus released into the environment. Because of their varied metabolic pathways, fungi fulfill an important ecological role and are being investigated as potential tools in bioremediation. For example, some species of fungi can be used to break down diesel oil and polycyclic aromatic hydrocarbons (PAHs). Other species take up heavy metals, such as cadmium and lead.

Some fungi are parasitic, infecting either plants or animals. Smut and Dutch elm disease affect plants, whereas athlete’s foot and candidiasis (thrush) are medically important fungal infections in humans. In environments poor in nitrogen, some fungi resort to predation of nematodes (small non-segmented roundworms). Species of Arthrobotrys fungi have a number of mechanisms to trap nematodes. One mechanism involves constricting rings within the network of hyphae. The rings swell when they touch the nematode, gripping it in a tight hold. The fungus penetrates the tissue of the worm by extending specialized hyphae called haustoria. Many parasitic fungi possess haustoria, as these structures penetrate the tissues of the host, release digestive enzymes within the host’s body, and absorb the digested nutrients.